Cedar Rapids, Iowa - Ramo Stott and Dick Hutcherson grabbed wins on a three-day swing through the Midwest as the IMCA stock cars made appearances at the Louisa County Fairgrounds in Columbus Junction, Iowa, Interstate Fairgrounds in La Crosse, Wis. and the Southern Iowa Fairgrounds in Oskaloosa, Iowa at the beginning of August in 1963. 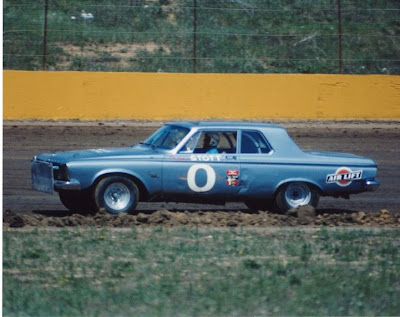 Track records fell by the wayside in Columbus Junction on Friday, August 2. Ramo Stott of Keokuk, Iowa, driving a '63 Ford, won the 25-lap event, setting a new track record of 12:05.48 on the flat 1/2-mile dirt track. He was followed by Dick Hutcherson, also of Keokuk, driving a '63 Ford, and Bill Moyer of Des Moines, piloting a '62 Ford. John Jones and Moyer won heats, John Mickey, driving a '63 Pontiac grabbed trophy dash honors while Chub Liebe of Oelwein, Iowa took the consolation.
Two nights later, on Sunday, August 4th in La Crosse, Hutcherson won both features, a day/night doubleheader. Hutcherson set fast time, won his heat, the trophy dash and the 25-lap feature in the afternoon tilt. Later that evening, he scored the second heat win and then held off Liebe and Stott in the 100-lap main event. 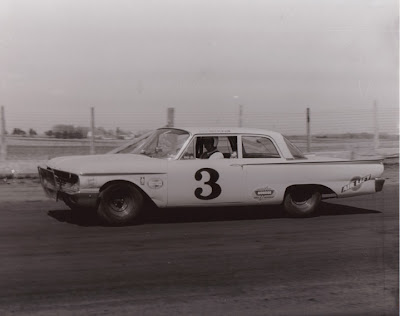 Dick Hutcherson of Keokuk, Iowa scored two IMCA stock car wins; the first in La Crosse on August 4th and the second at Oskaloosa on August 6, 1963. "Hutch" would go on to win his first of two IMCA national championships that year.
The IMCA circuit made its way back south once again and took to the half-mile at Oskaloosa on Tuesday, August 6th. The track was hit with four inches of rain on race day but Southern Iowa Fairboard president Paul Van Zee managed to get the track in race shape before the evening's events got underway.


The track was so heavy Darrell Dake of Cedar Rapids, behind the wheel of a '63 Ford, was a full five seconds off the track record. In the feature race, Hutcherson grabbed the lead from the onset and dominated the 100-lapper. Defending IMCA national champion Ernie Derr of Keokuk, got within four car lengths of Hutcherson at one point and was closing the gap when a near spin-out on lap 81 set him back half a lap. Derr, Stott, John Mickey and Bob Reynolds rounded out the top-five finishers.