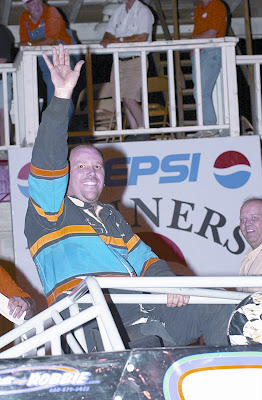 Alan Vaughn waves to the crowd from victory lane after winning the Dirt Works Topless Nationals in Sedalia, Mo., on August 30, 2002.
2002 -Alan Vaughn of Belton, Mo., led all 30 laps but had to hold off Al Purkey of Coffeyville, Kan., by a car length to win the Topless Nationals at Sedalia, Mo.'s State Fair Speedway on August 30. Vaughn took home $2,500 first place money from the $20,000 purse. Skip Frye of Ely, Iowa took third, Gary Webb of Blue Grass, Iowa, fourth and Chad Lyle of Lone Jack, Mo., was fifth.
1987 - Kevin Gundaker (UMP late models) and Tony Weyant (winged sprints) were winners at Mid-States Raceway in White City, Ill., on August 28. Gundaker dueled Larry Phillips for half of the 25-lap feature before Phillips pulled out with mechanical failure allowing Gundaker pull away for the win. Ray Guss Jr., Ron Fisher, Dick Taylor and Bill Shaw rounded out the top five. Weyant cleaned house in the sprint as he won his heat, trophy dash and 25-lap feature. Donnie Beechler took runner-up honors while Randy Standridge, Manny Rockhold and Jeff Wiggs followed.
1975 - Tom Bigelow of Whitewater, Wis., and Joe Saldana of Lincoln, Neb., split a pair of features in the USAC-sanctioned sprint car races at the Minnesota State Fair in St. Paul, Minn., on August 30 before 8,821 fans. Bigelow passed Johnny Parson of Speedway, Ind., on the last lap to win the 40-lap matinee while Saldana too the lead from fast qualifier Marv Carman of Union City, Mich., on the 33rd lap to win the 40-lap nightcap. 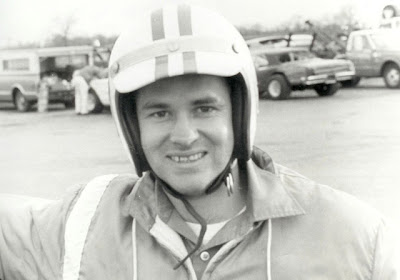 Joe Shear couldn't help but smile after winning his third straight Rockford Speedway championship on August 30, 1968.
1968 - Joe Shear of South Beloit, Ill., capped off his third consecutive Rockford Speedway point's title by winning the 75-lap season championship race on August 30. Shear took the lead on lap 15 and was never in trouble after that. For Shear, it was his eighth win of the season including the 75-lap mid-season championship and the Spirit of 76 special held on July 4th.