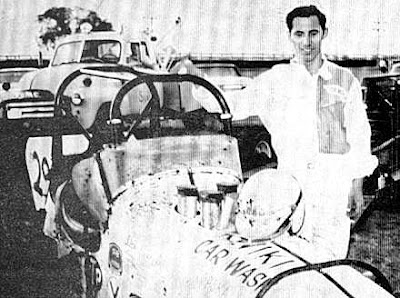 A photo of Thad Dosher of Topeka, Kan., published in the 1968 Knoxville Super Modified National Championship official program.
Cedar Rapids, Iowa - I spent a considerable amount of time organizing my racing archives in my garage today. I ran across a real gem; the official program of the 1968 Knoxville Super Modified National Championships. While reading through it, I found some little-known facts about the '68 Nationals and the Marion County Fairgrounds...

* The total purse that year for the three-day event was $15,000.
* On the front cover they had head shots of some of the drivers competing in the event. They included Jay Woodside, Dick Sutcliffe, Lloyd Beckman, Joe Saldana, Roy Robbins, Bill Utz, Jim Edgington, Jerry Weld, Earl Wagner and Jerry Blundy.
* The Marion County Fairboard consisted of President Carroll Price, Race Director Marion Robinson and the treasurer at the time was some guy named Ralph Capitani.

On page two of the program they discussed how Knoxville Raceway had grown by leaps and bounds since it's beginning in 1954. That year, the fair association looked around for a way to make greater use of the grounds and it's facilities, rather have it sit idle except for the six days of the year when the annual fair came to town. Racing seemed to be the solution and beyond a shadow of a doubt, a wise choice.

Most of the earnings from the auto racing venture was poured back into the fairgrounds. The expansion of the grandstands and a increase in protective installations had taken a big chunk of the profits but it was money well spent. Here's why...

Once, several years ago, a driver flipped his car over the fence and in the process cut a telephone cable, putting part of Marion County out of telephone service for several days. The incident prompted officials to increase protective barriers along the highway, another expenditure taken from the racing profits.