1995 - Kenny Jacobs of Holmesville, Ohio, scored the win in the 32nd Annual Jayhawk Nationals at Thunderhill Speedway in Mayetta, Kan., on August 20. Jacobs got past Steve Kent of Fresno, Calif., on lap 12 and then used lapped traffic to his advantage to score the $6,000 victory. An estimated crowd of 2,500 people turned out to watch 31 racers from nine states compete. 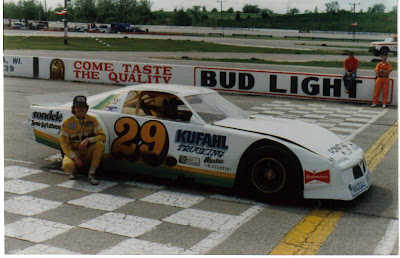 Doug Herbst of Wausau, Wis., earned his first state championship by winning the 100-lap finale of the Red, White and Blue Series at Kaukauna, Wis., on August 20, 1989.
1989 - Wausau's Doug Herbst won the battle and the war Sunday afternoon at Wisconsin International Raceway in Kaukauna, Wis., August 20. Herbst powered past Green Bay's Scott Hansen on the 53rd lap and went on to win the 100-lap late model feature to complete the 17th Annual Red, White and Blue Series. Herbst, in the process, wrapped up his first-ever state championship series title. 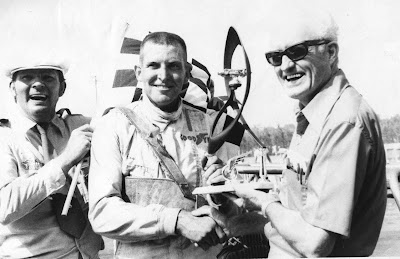 Dave Ross of Jetmore, Kan., receives his trophy from Iowa State Fair secretary Kenneth Fulk of Des Moines after Ross won the 30-lap IMCA sprint car race at the Iowa State Fairgrounds on Sunday afternoon, August 20, 1972. Flagman Larry Shipley presents the checkers in victory lane. — Morris "Beetle" Bailey Photo
1972 - Dave Ross of Jetmore, Kan., and Gene Gennetten of Gladstone, Mo., split a day-night IMCA sprint car doubleheader at the Iowa State Fairgrounds in Des Moines, Iowa, on August 20. After qualifying fifth in time trials, Ross ran away with the afternoon feature on a dry-slick track that was to his liking. Gennetten, in his first time at the fairgrounds, nabbed the lead from Ray Lee Goodwin of Kansas City on lap 20 of the 50 lapper and then held off a determined Eddie Leavitt of Kearney, Mo., in the last three laps to score the $1,000 payday.
1967 - It required two passes for Dean Montgomery of Milan, Ill., to become a feature winner in the IMCA late model stock cars at Quad City Raceway in East Moline, Ill., on Sunday night, August 20. The veteran nosed past early leader Lyle Behne of Moline on lap 13 of the 25-lap contest but that effort was erased when Jack Henson of Biggsville, Ill., lost a wheel bringing out the caution and bringing the field back to its original positions. Three laps later, however, Montgomery got around Behn and powered his 1967 Chevrolet into the lead for good.