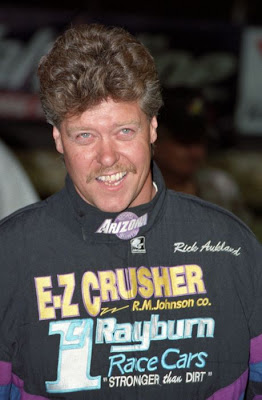 Rick Aukland was all smiles after winning the USA Nationals 100 at Cedar Lake Speedway on August 9. 1997.
1997 - Rick Aukland of Fargo, N.D., became the 13th different winner on the Hav-A-Tampa Dirt Racing Series tour with a rousing win in the USA Nationals 100 at Cedar Lake Speedway in New Richmond, Wis., on August 9. Aukland slipped by Bill Frye of Greenbrier, Ark., at the start-finish line with two laps to go and then motor away for the victory. Donnie Moran of Dresden, Ohio, snared second, Frye settled for third, Rick Eckert of York, Penn., fourth and Wendall Wallace of Batesville, Ark., rounded out the top five.

1987 - Rocky Hodges of Des Moines became the first driver to win both the Jayhawk Sprint Car Nationals and the Jerry Weld Memorial during the same season on August 16 -17. At Lakeside Speedway, Hodges started from the pole in the Jayhawk Nationals and rode the high groove to perfection holding off Jeff Swindell and then two-time winner Jimmy Sills to score the decisive victory. The next night at I-70 Speedway, Hodges had to work through the field from his fifth row starting position. Hodges grabbed the top spot from race leader T.J. Giddings on lap 11 and kept the rest of the field at bay. In all, Hodges collected $10,000 for his two wins, including a $3,000 bonus for capturing both events. 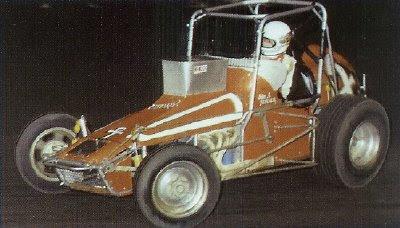 Eddie Leavitt of Kearney, Mo., won his first of two Knoxville Nationals title at the Marion County Fairgrounds on August 9, 1975.
1975 - Eddie Leavitt of Kearney, Mo., won the 30-lap National Super Sprint Championships at the Marion County Fairgrounds in Knoxville, Iowa, on August 9. Even though the 32-year-old pilot won by three-quarters of a lap over Roger Rager and nearly lapped the rest of the field, Leavitt slammed into the wall on the 29th circuit damaging his car. "I got into some rough dirt in turn four and lost control, Leavitt said. "The rear axle was bent and the car really vibrated on the last lap. I was really worried that I wasn't going to make it." Rager, Rick Ferkel, Fred Linder and Jan Opperman would round out the top five finishers.

1969 - Marv Marzofka of Wisconsin Rapids, Wis., made an extra $200 but it was hometown boy John Ziegler that walked away with two wins at Capital Super Speedway in Madison on August 7 -8. Race promoter Sam Bartus offered $200 to any driver who could break the 20 second barrier and Marzofka toured the 1/2-mile in 19.96 seconds. Ziegler dominated the 50-lap mid-season championship on Thursday night and then fought off Ed Hume and Dick Duerst to win on Friday evening as well.