by Lee Ackerman
Omaha, Neb. - Labor Day weekend the NASCAR Camping World Truck Series will be at the Iowa Speedway and that got me to thinking about some of the earlier Craftsman Truck races in the Heartlands.
Of course, the Trucks have been running at the Milwaukee Mile and Indianapolis Raceway Park since the inception of the series. They have also been running at Gateway International Raceway in Madison, Ill., and the Kansas Speedway for a number of years, but what about the other two tracks that they raced at for the first five years of the series? I-70 Speedway near Odessa, Missouri and Heartland Park Topeka, just south of Topeka, Kan.
The NASCAR Trucks Series came into being in 1995, and on May 28, 1995, 26 trucks would enter the Western Auto 200 at the .543 mile I-70 Speedway near Odessa, Mo. The name of the series in 1995 was the NASCAR SuperTruck Series by Craftsman. Craftsman was not the only familiar name we find when we look back on the inaugural season of the series. Mike Skinner and Ron Hornaday, Jr. were regulars in that first truck season. Skinner would win the inaugural season championship with Hornaday third. While they may have left the series a time or two in between, they are still contenders for the Series Championship once again in 2009. 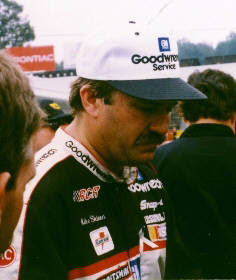 Mike Skinner won the inaugural NASCAR Supertrucks Series event at I-70 Speedway near Odesaa, Mo., on May 28, 1995.
Mike Skinner driving the GM Goodwrench Service Chevrolet #3 for owner Richard Childress would win the inaugural truck race at I-70, winning the race with an average speed of 69.830 mph. Dave Rezendes would drive the #7 Exide Batteries Ford to second with Butch Miller in the Raybestos #98 Ford coming in third. Other regulars in the series that first year were, spring car ace, Sammy Swindell in the #38 ChannelLock Tools Ford, off-road champion Walker Evans in the #20 Barbary Coast Dodge, Rick Carelli in the #6 TOTAL Petroleum Chevrolet, and former NFL Head Coach Jerry Glanville in the #81 Glanville Motorsports Ford. The purse for the Western Auto 200 that year was $145,550.
Later in 1995, the series would make their may to Heartland Park Topeka where on July 29, 1995, 33 participants would battle it out on a 1.8 mile road course in the Heartland Tailgate 225. Ron Hornaday, Jr. driving the #16 Papa John’s Pizza Chevrolet would set fast time at 92.430 mph and go on to win the 60 lap event. Hornaday would lead the entire race except for laps 31-32 when race runner-up Joe Ruttman in the #84 MAC Tools Ford assumed the lead.

On July 27, 1996 the trucks made their second annual visit to I-70 with Butch Miller the fastest qualifier at 113.053 mph. Mike Bliss would wheel the Team ASE Racing Ford #2 to the win in a race that saw 9 cautions and 5 lead changes. Bliss would be followed by Mike Skinner, Rick Carelli, Ron Hornaday, Jr. and Bill Sedgwick. 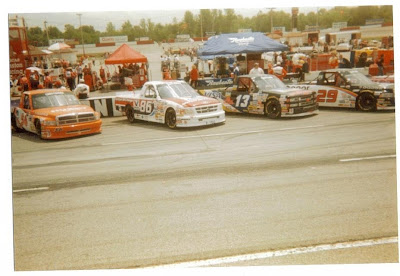 Tony Raines would win the third Craftsman Truck race at I-70 when on May 24, 1997 he drove the #19 Pennzoil Dodge to victory lane in the Western Auto 200. Raines would collect nearly $30,000 of a $316,384 purse. Jimmy Hensley was second in the Cummins Engine Company Dodge, Chuck Bown third in the Exide Batteries Ford and Polesitter and new track record holder Rich Bickle, fourth in the Sears DieHard Chevrolet. On July 27, the trucks would race at the lengthened 2.1 mile road course at Topeka with Joe Ruttman setting fast time and winning the race in his LCI International Ford. The race would see 9 lead changes during the 81 lap Lund Look 275. Jack Sprague would finish second in the Quaker State Chevrolet and go on to win the Series Championship in 1997.
Also in the field were road racer Dorsey Schroeder, Bobby Hamilton, Rick Crawford, Boris Said, Ron Fellows and the late Kenny Irwin.
When the trucks returned to I-70 on May 23, 1998, the race was called the Yellow Freight 200, but the results were the same as the year before, as Tony Raines, once again took the Pennzoil #19 to victory lane, but this time it would be the Pennzoil Ford. Raines would also set a new track record in qualifying at 114.269 mph. Joe Ruttman would finish second and Mike Bliss third.
On August 23, 1998 at Topeka, Boris Said would set a new track record of 88.897 mph for the 2.1 mile course and Stacy Compton would drive the #86 Royal Crown Cola Ford to the win. Terry Cook would finish second in the event which saw 8 lead changes, Jimmy Hensley third and Jack Sprague fourth. 1999 would be the last time the trucks ran at either I-70 or Heartland Park Topeka. One thing would be the same at both races that year, the sponsor, O’Reilly Auto Parts. First it would be at I-70 on May 22nd, where Stacy Compton would set a new track record in qualifying at 114.759, but Jack Sprague would end up in victory lane in the #24 GMAC Financial Services Chevrolet in a race that saw 11 lead changes. Dennis Setzer in the #1 Mopar Performance Dodge was second and Andy Houston in the Cat Rental Store Chevrolet was third. Polesitter Stacy Compton would finish fourth. Boris Said set a new track record at 89.287 mph in the trucks last appearance at Topeka. The 75 lap affair would see 10 lead changes with Mike Bliss in the #99 Exide Batteries Ford taking the win. Bliss would be followed by Said, Jay Sauter and Rick Crawford.

In 2009 the trucks will invade another new short track in the heartland, with their first race at the beautiful Iowa Speedway. They will bring a new series sponsor in Camping World, but some things will still be the same. Old veterans from those first years of the series like Ron Hornaday Jr., Mike Skinner, Todd Bodine and Dennis Setzer will still be battling it out. One thing that has not changed and that’s the close competition and exciting racing the trucks provide the fans.