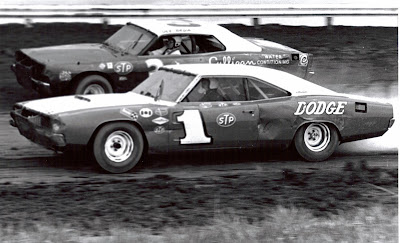 Ernie Derr (1) of Keokuk, Iowa races with Ole Brua during an IMCA stock car race. Derr would win 12 IMCA national championships
by Lee Ackerman
Omaha, Neb. - Did you every watch, Back in the Day on the Speed Channel with Dale Earnhardt Jr.? That’s where Dale Junior hosts a series of old NASCAR Cup races from the 60’s & 70’s originally released as Car & Driver and hosted by Bud Lindeman.
Well, I’m going to take you back even further as we go look at the International Motor Contest Association Stock Car Series that competed primarily at the county and state fairs from 1949 through 1977.
Specifically, we are going to take a look at the king of the series, Ernie Derr. When you meet Ernie Derr, you see this small, quiet man and you if didn’t know better you would say he probably lived a quiet life. Nothing could be further from the truth.
While Ernie has always been quiet, and to himself, his accomplishments in auto racing and the International Motor Contest Association in particular, simply go off the charts. 328 feature wins and 12 championships in IMCA alone, what else needs to be said. It didn’t matter what brand of car it was, in 1951 he won in a Mercury, then it was Oldsmobile’s for several years, then a long run with Pontiac’s, then a year with Plymouth’s, and then he simply steamed rolled the competition in his Dodge. 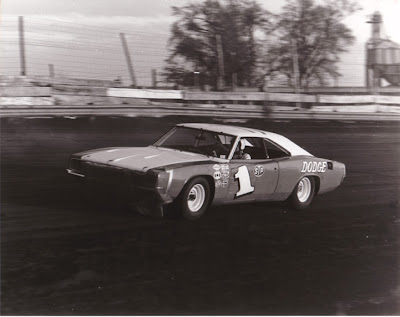 Ernie Derr drove Mercury's, Oldsmobile's, Pontiac's, Plymouth's and Dodge's (shown here) with equal success in the IMCA stock car ranks.
Ernie Derr was born November 29, 1921. While known as the part of what this author calls the “Keokuk Connection”, he actually lived for many years in nearby Fort Madison.

He got his start in racing in 1950 after watching brother-in-law, Don White race and thought “it looked like a good way to make a dollar.” That year he finished 17th in IMCA points running only a few races. On July 1, 1951, Ernie won his first IMCA race winning the prestigious 250-lap feature at the Iowa State Fairgrounds in his Mercury and went on to finish 5th in the points.

In 1952, this time behind the wheel of an Oldsmobile, Ernie won 7 IMCA features and finished second in the points. In 1953 Ernie won his first of 12 IMCA championships, winning 15 races in his Oldsmobile beating out brother-in-law Don White for the title.

In 1954 Don returned the favor edging Ernie for the title. In 1955, Ernie decided to try ARCA as well as IMCA and went on to win six events with that series. He was also in fifth place in IMCA in September 1955 with several wins, when IMCA stripped him of his points for running an unsanctioned race. He would win a total of 11 ARCA races in a limited ARCA career.

In 1959, Ernie Derr would move to the front of the pack again, wheeling his Pontiac to 30 series wins and the Championship. He followed that up with Championships in 1960 & 1961 with 22 & 21 wins respectively.

In 1962, Ernie drove his Pontiac to a fourth straight series championship, winning 28 of 51 races including 8 in a row. For this phenomenal feat he earned $19,289.

In 1964 Ernie switched to a Plymouth. 1964 was a perfect season for the Keokuk Connection of Derr, Dick Hutcherson and Ramo Stott. The three of them combined to win all 56 IMCA stock car races held that season.

In 1965, Ernie Derr switched to a Dodge and as they say the rest is history. Seven straight IMCA championships and domination of the IMCA series, with only fellow Keokuk native, Ramo Stott able to give Derr a run for the points title. During one three-year period, 1964 to 1966, Keokuk drivers (Derr, Stott & Dick Hutcherson) won all but two races in IMCA and at one of those races, they were not in attendance.

Like some NASCAR stars, there were races that Ernie had trouble winning. One of those was the Iowa International 300. Ernie had actually won the race in 1951 (his first ever IMCA win) and again in 1953, but those races had been 250 lap affairs. In 1957, the race was extended to 300 laps and gremlins always seemed to bug Derr at the 300.

In 1966, he finally got rid of the gremlins and won the Iowa International 300. Once Ernie got things figured out, you were in trouble. He would win the event every year through 1971, the year he retired from full time racing.
Ernie Derr accepts the checkers and the trophy for winning the Iowa 300 at the Iowa State Fairgrounds in Des Moines, Iowa in 1969.

In 1969, Ernie won 25 of the 30 IMCA features, including the last 12 races of the season. Also, that year Ernie was joined on the IMCA circuit by his son Mike, and later son Russ would also compete in IMCA. Mike would go on to win several IMCA events and would battle fellow Keokuk resident, Gordon Blankenship for the 1973 IMCA Championship, losing to Blankenship by just five points.

Ernie Derr would run only one NASCAR Cup event (then called Grand Nationals). That would be on August 2, 1953 at the Davenport Speedway in Davenport, Iowa. He would finish well done in the running order of that 200-lap event.

Of course, in 1953, NASCAR was just another series. One wonders what would have happened if Ernie would have lived closer to the heart of NASCAR. Ernie still lives in Keokuk and keeps busy around the property he owns, and as always, he doesn’t say much. He doesn’t have to; his accomplishments say it ALL.