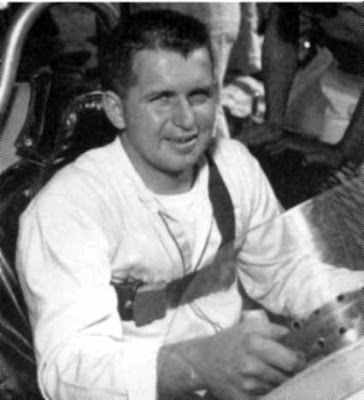 Even upside down in a sprint car, Jim Hurtubise had a sense of humor.

Cedar Rapids, Iowa - This Friday at Hawkeye Downs, the late promoter Frank Winkley will be inducted into the Wall of Fame. Mike Heffron of St. Paul, Minn., who worked with Winkley and will be accepting on Frank's behalf, shared an amusing story with me recently that happened at Hawkeye Downs 50 years ago.

July 5, 1959 - "A one-day rain delayed sprint car date ... Under the lights ... Second heat ... On the start Jim Hurtubise comes up fast and runs over Mickey McCormick's rear wheel and flips out over the backstretch fence ... I'm in the judges stand with Winkley who reacts to the accident by jumping, rather than climbing down the stairs, (nearly breaking a leg), runs across the infield and over the fence ... I'm in hot pursuit, but had a hard time keeping up ..."


"In those days there were railroad tracks running parallel to the backstretch ... Maybe they're still there (they are) ... Wink and I and two crewmen got to Jim about the same time ... The car is upside down, straddling the railroad tracks ... The fuel tank was split ... fuel was running down into the cockpit ... Jim was barely visible ... Frank bent down to see if "Herk" was conscious ... he was ... Frank told him to release his belt and they would lift the car off him ..."