by Kyle Ealy
Note: With the 37th Annual Miller 100 set to go this Friday night, I thought it would be nice to go back in time and see how the Miller 100 has evolved over the years. A lot of great names have raced in this prestigious event and this year's will be no different. I hope you enjoy looking back...
1973 — Butch Hartman of Zanesville, Ohio, won the very first “Falstaff 100” at Hawkeye Downs Speedway on September 29, when it was a USAC-sanctioned event, leading all 100 laps. Two Keokuk, Iowa veterans, Ernie Derr and Ramo Stott, finished second and third. Only 13 cars started the feature that day with the average speed of the race 67.979 mph. The race took 44:19:00 to complete.
1974 — Stock Car veteran Bill Zwanziger of Waterloo, Iowa, won the “Falstaff 100” on Tuesday, July 16. Darrell Dake finished second and Omaha’s Bob Kosiski took third.
1975 — It was a battle of Sangers as Ed beat brother Karl for the win in the “Falstaff 50” on July 15. Roger Dolan started on the pole and led until lap 33 when Ed Sanger took over and then held off his brother Karl for the win. Don White of Keokuk, Iowa finished third.
1976 — It was called the “Falstaff Classic” and it was to be run on the “New Track”, a ½-mile dirt oval. A record purse at that time, $7,600, was paid out that night with the winner to receive $1,300. The race was set for July 20, but a rainout pushed it forward to July 26. The delay didn’t stop Curt Hanson of Dike, Iowa from winning the 50-lap race. Bill Beckman of Lisbon, Iowa, set a new one-lap track record that night, qualifying his car on the pole with a time of 24.06. 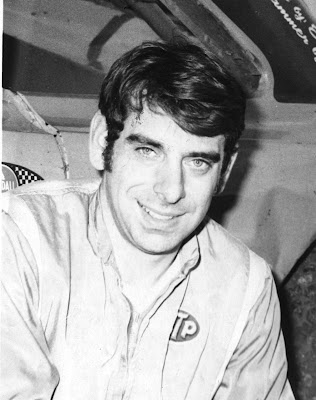 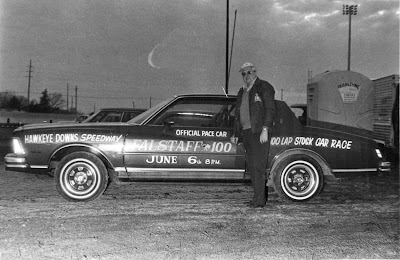 Cedar Rapids, Iowa's Keith Fleck of Fleck Sales poses next to the "Falstaff 100" pace car at Hawkeye Downs Speedway on June 6, 1978.
1978 — Curt Hanson of Dike, Iowa, took the lead at the drop of the green and went on to win the “Falstaff 100” on June 6. It was Hanson’s second “Falstaff” win and it came before a record crowd of over 7,000 fans. The win paid Hanson $3,200 in total prize money.
1979 — Verlin Eaker took the lead away from Mike Niffenegger on lap 46 and went on to win the prestigious “Miller 100” on June 5. It marked the second straight 100-lap win for Eaker dating back to his victory in the “Yankee Dirt Track Classic” last September. 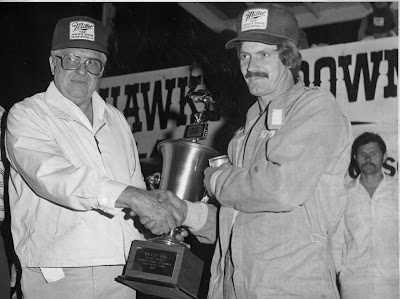 Rodney Combs of Lost Creek, W.Va., is congratulated by race promoter Keith Fleck after dominating the 8th Annual Miller 100.
1980 — The 8th Annual “Miller 100” was won by 30-year-old Rodney Combs of Lost Creek, W.Va., before 6,000 race fans. Defending champion Verlin Eaker of Mechanicsville, Iowa, was involved in an accident on the very first lap squashing any chance of defending his title.

1981 — Leon Plank of Eau Claire, Wis., won the “Miller 100” on June 9. A rough track took its toll on cars as only eight of the 28 starters were around when the checker waved. Plank took command on lap 80 and held off a late charge from Viola, Iowa’s Ken Walton to take the $2,000 to prize.

1982 — Ron Jackson of Burlington, Iowa, won the “Miller 100” on June 9. The race had been delayed one day because of rain. Jackson took the lead on lap 29 and was never headed. Darrell Dake got close several times in the late stages but settled for second, a full seven seconds behind Jackson. 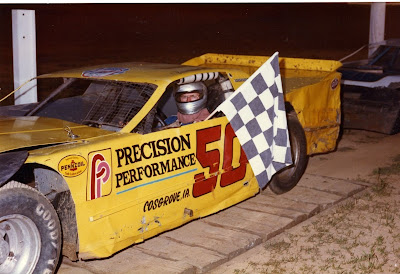 Roger Dolan of Lisbon, Iowa won his first of two Miller 100's in 1983.
1983 — NASCAR Star Bobby Allison made an appearance to Hawkeye Downs Speedway but it was long-time veteran Roger Dolan who made it to victory lane at the 11th Annual “Miller 100” on June 7. Dolan played the waiting game during the race, finally passing leader Kenny Walton on lap 93 to take the well-deserved victory.
1984 — After coming so close in a couple of the previous races, Ken Walton made it clear that the “Miller 100” was his this year, leading all 100 laps to take the win on June 5. Both Bobby Allison and his 23-year-old son Davey crashed taking each other out in the process on lap five of the contest.
1985 — Tom Hearst of Wilton, Iowa, took command of the rain-interrupted “Miller 100” on the 52nd lap and then held off Batesville, Ark., driver Billy Moyer Jr., to win the $2,100 prize.
1986 — After two straight nights of postponements, the NASCAR-sanctioned “Miller American 100” took place Thursday, June 12. It was the second event on event on the 14-race Busch All-Star Tour and paid a $15,000 purse. Roger Dolan, Tom Hearst, Dale Fischlein and Billy Moyer all led the prestigious race at one time before Dolan took command for good on lap 68 and went on to his second career victory.
1987 — After previous top-five finishes, Billy Moyer Jr. of Batesville, Ark., won his first “Miller 100” on June 9. Moyer passed Roger Dolan on lap 72 and coasted from there. Dave Birkhofer of Muscatine finished second and Steve Kosiski took third.
1988 — Billy Moyer came from the back of the pack twice, once in the first 50 laps and then again in the next 50, to win the 16th Annual “Miller 100” on June 7. He became the first driver to win back-to-back “Miller 100” events.
1989 — History was made this year when the “Miller 100” was run on the new asphalt at Hawkeye Downs Speedway. Steve Holzhausen of Bangor, Wis., won the annual event that features the “Cars and Stars” of the ARTGO Series, their first-ever appearance at the speedway.
1990 — Larry Phillips of Springfield, Mo., making his first ARTGO start in 12 years, upset the ARTGO Challenge Series field in winning the rain-delayed 18th Annual “Miller 100” on June 6. Phillips held off Bryan Reffner of Wisconsin Rapids, Wis., by half a car length at the finish.
1991 — Joe Shear inherited the lead with six laps to go when Steve Carlson’s car suffered a broken ball joint to win the 19th Annual ARTGO “Miller Genuine Draft 100” on June 8.
1992 — Much to the delight of the hometown fans, Johnny Spaw won the “Miller 100” on Saturday night, June 2. Spaw battled fellow Cedar Rapidian, Dudley Fleck, for most of the race until Fleck was involved in a spectacular accident.
1993 — Mel Walen of Shakopee, Minn., thwarted Johnny Spaw’s attempt to win two in a row by slipping pass Spaw on the 59th circuit to win the “Miller Genuine Draft 100” collecting $5,050.
1994 — Tom Carlson, La Crosse, Wis., captured the NASCAR Northern Series “Miller Genuine Draft 100” on June 9 in an exciting shootout with Kevin Nuttleman that saw both drivers side-by-side for the final five laps of the race.
1995 — Over the winter, Joe Shear of Clinton, Wis., beat cancer and on Tuesday, June 6, beat a stellar field of Late Models to win the ARTGO Challenge Series “Miller Genuine Draft 100”. Shear passed Jim Weber on lap 54 to take his second career “Miller”.
1996 — After numerous attempts Steve Carlson of West Salem, Wis., finally captured his first “Miller 100” on June 4. An estimated 6,000 race fans were in attendance to watch Carlson begin his run from his 11th starting position to grab the lead on lap 25 from Johnny Spaw and stay there for good. 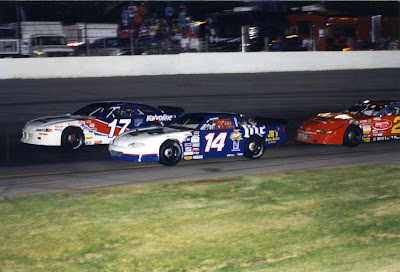 Dudley Fleck (14) battles with Jon Lemke (17) as Jim Weber (28) looks for room during the ARTGO-sanctioned "Miller 100" at Hawkeye Downs Speedway in Cedar Rapids, Iowa, on June 14, 1997. — Vince Brecht Photo
1997 — Steve Carlson became the second driver to win back-to-back “Miller 100” events winning the 25th annual event on Saturday night, June 14. Long-time flagman Engel DeKock came out of retirement to start the race. Ramo Stott, Verlin Eakers, Roger Dolan, Irv Janey and Fred Horn were among drivers who competed in a “Legends of Miller 100” race and long-time race organizer Keith Fleck was honored for his efforts in raising over $200,000 for charities in the 25-year history of the prestigious race.

1999 — Kevin Nuttleman of Bangor, Wis., won the McLeod USA Gold Star Series “Miller Lite 150” on June 15. The significance of 150 laps was in celebration of Cedar Rapid’s 150th birthday. Nuttleman passed two-time winner Steve Carlson on lap 18 and never relinquished the lead after that.

2000 — Josh Walker of Ankeny, Iowa, took home the win in the 28th Annual “Miller 100” on June 7. Walker bolted from his front-row starting spot to lead green to checkered.

2001 — Steve Carlson became the first three-time winner of the “Miller 100” when he scored the victory in the 29th annual running. Carlson started in the eighth row and methodically made his way to the front passing Doug Hite on lap 70 to go on to the win.

2002 — Justin Diercks of Davenport, Iowa, held off a determined Johnny Spaw to win the 30th Annual “Miller 100” before a standing room only crowd during the Hawkeye Downs Fair.

2003 — Justin Diercks gave a repeat performance winning the “Miller 100” on June 11. A couple of late race cautions put Dudley Fleck and Johnny Spaw in striking distance, but Diercks powered his Late Model around the ½-mile to take the win.

2004 — Charlie Menard of Eau Claire, Wis., made his way to the front from his 14th starting position to win the MARS Late Model “Miller 100” on June 25. Menard used a nifty high-side move to pass Dean Cornelius on lap 22 and take the lead for good.

2005 — The 33rd Annual “Miller 200” kicked off the Hawkeye Downs Fair on June 8th with Stephen Leicht winning. The American Stockcar League (ASL), a new series formed after the disbanded American Speed Association ran a 150-lap feature along with a 50-lap feature for Late Models. 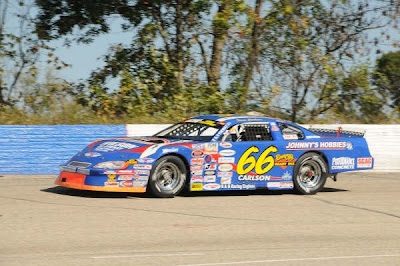 2008 - The 36th annual event was originally scheduled for June 13th. However, because of the severe flooding in Iowa at the time, the race was re-scheduled for July 18th. Steve Carlson’s domination in the marquee event continued as he picked up his fifth career Miller 100. Carlson started seventh and was out in front by lap 40.