1975 - Ed Sanger of Waterloo, Iowa, made it a clean sweep by winning the late model trophy dash, third heat and the feature at Denison (Iowa) Speedway on June 28. Sanger passed Randy Sterner of Blair, Neb., for the lead on lap 13 of the 20-lap feature and then held off Council Bluff's Ron Tilley for the win. 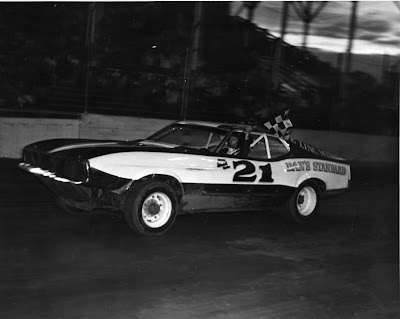 Wendell Kuehn of Rochester, Minn., waves the checkers after winning the first to two late model features during the Ole Brua Memorial in Cresco, Iowa on June 29, 1974.

1974 - Wendell Kuehn of Rochester, Minn., emerged as the overall winner of the Ole Brua Memorial at the Howard County Fairgrounds in Cresco, Iowa on June 29. Kuehn fended off Ed Sanger to win the first 20-lap feature and then came from the rear to place third in the second 20-lap feature to take home $380 in cash and a diamond ring worth $1,100. The race was held in honor of IMCA driver Ole Brua who died one year earlier in a car-train crash in Rochester, Minn.
1969 - Gale Card of Waterloo, Iowa dealt the rest of the late model stock car field an ace as he won the 25-lap feature before 8,000 fans at Hawkeye Downs Speedway in Cedar Rapids, Iowa, on June 28. Card out-dueled Lisbon, Iowa's Roger Dolan the last 21 laps in his 1968 Road Runner. Karl Sanger of Waterloo, Walt Carney of West Branch and Waterloo's Red Droste rounded out the top-five finishers.

1968 - Ron Brokaw of Corning, Iowa, drove an amazing race to win the super stock feature at Greenfield (Iowa) Speedway on June 29. Brokaw started 10th but was able to secure the lead on the third lap and place almost a half a lap lead between him and his nearest challenger. Varel Schmidt of Massena, Iowa took second followed by Corning's Sam Armstrong. Kay Whitehead of Clarinda, Iowa scored her second win in the "unusually" accident-free powder puff race.