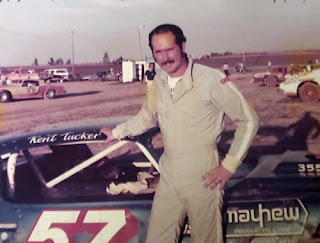 Kent Tucker
Omaha, Neb. - It was a night of firsts at Sunset Speedway on June 27, 1976.
Kent Tucker of Aurora, Neb., made history with his first career win at Sunset that evening. He was also the first late model driver in victory lane this season not named Kosiski. Bob Kosiski of Omaha had a five-week feature winning streak in the late model division heading into the night's program.
After Kosiski's second victory, a $200 bounty was placed on his head but Kosiski kept winning. Three weeks later, the bounty was a whopping $600. The 25-lap race turned out to be one of the most thrilling features that Sunset Speedway had seen in years, with the lead changing six times among four drivers, Joe Kosiski, Craig Spetman, Bob Kosiski and finally Kent Tucker.
At many times, the top eight cars ran bumper to bumper, side to side with Tucker finally passing Bob Kosiski on lap 20 to take the lead. Bill Martin of Council Bluffs, Iowa followed Tucker past Kosiski and gave chase until the apple farmer developed problems and dropped back with two laps left. Kosiski picked up the pace but was unable to extend the bounty for another week and settled for second. Fremont's Don Styskal took third, Spetman finished fourth and Paul Zdan rounded out the top five.
With the $400 regular night winnings and the collected bounty, Tucker should of taken home $1,000 but because of what flagman Poncho Goldsberry and association president Randy Sterner termed "rough driving" by Tucker and Martin earlier in the contest, they were both fined $25 after the feature thus leaving Tucker with a $975 payday instead. This decision outraged some of Tucker's fans and upon hearing this coughed up $25 so his winnings could be an even $1,000.