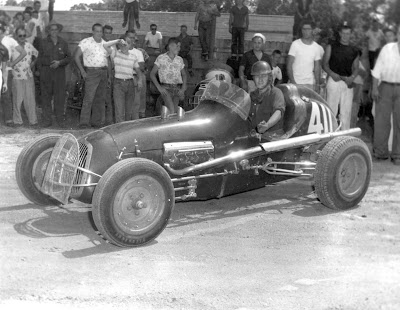 Mount Pleasant, Iowa - They were called “Big Cars” back then and in the 40’s, 50’s and even into the early 60’s, when they came to town, it was a big thing. So big in fact, that the town of Mt. Pleasant, Iowa literally shut down.

The MVARA made its first appearance in Mt. Pleasant, Iowa and the Henry County Fair on August 8, 1948. The ½-mile track had been used primarily for horse racing throughout the years but Big Cars were the thoroughbreds on this day. Unfortunately, the day’s events off to a poor start. In the very first race, Merritt Wandling’s car crashed through the fourth turn guard rail taking out several posts. In the process, a piece of wood pierced Wandling’s abdomen. He was transported to the University of Iowa hospitals where he was pronounced dead. When the action resumed, Charlie Irons grabbed the feature victory.

On August 7, 1949, the Henry County Fair closed out its annual summer fair with another overflow crowd at the McMillan Park Amphitheater. It was said that not only were the stands at full capacity but fans who couldn’t find a seat found a spot on top of the nearby cattle barns. The main event on the crowd on their feet as local boy Dick Nau took the early lead and battled side by side with Roy Blinstrup. Nau’s engine finally gave up towards the end of the feature allowing Blinstrup to take the win.

The August 8, 1950 race saw another full house. It also saw a disqualification as Johnny Noble was first across the finish line with a hard charging Clair Peterson right on his heels as the checkers waved. A post-race inspection showed that Noble’s car did not meet MVARA specifications and Peterson was awarded the victory.

A young lanky driver from Brimfield, Ill., had also joined the circuit that season and left an impression on the Mt. Pleasant residents. He would go on to win the 1951 Mississippi Valley Auto Racing Association championship but would be more noted for winning the 1971 and 1972 IMCA sprint car titles. His name was Jerry Blundy.

Mt. Pleasant residents took their Big Car racing seriously. An advertisement in the August 6, 1951 Mt. Pleasant News stated that all retail stores would be closed on the day of the big race. Even store owners didn’t want to miss out on the action. Jack Biddison pulled double duty that evening. He not only took the 15-lap win but doubled as the announcer that afternoon when he wasn’t behind the wheel.

Over 3,500 fans filled McMillan Park on August 2, 1952. Herb Shannon, who would later go on to star in USAC and ARCA, made one of his first starts in a Model T flathead. Winning the race was Jimmy Vichetti of St. Louis over Jimmy Haines of Chicago and local favorite Dick Nau.

On August 1, 1953, race fans saw the good and the bad. Dick Nau finally won a feature on his hometown turf. What made his win even more interesting was Nau was entered as the “Masked Marvel” with a big question mark painted on the side of his car. It was a publicity stunt at it’s finest. The crowd was told that the masked driver didn’t have to reveal his identity unless he lost a race. Nau topped the time trials, won his match race, first heat and feature, thus he kept his mask on.

Unfortunately, tragedy struck once again. In the third heat Eddie Loetscher was leading on the last lap when he slowed for a turn. Dutch Morehouse went over Loetscher’s rear axle, causing Morehouse to flip violently. Morehouse was thrown from his car and bounced several times on the track. He died later of a skull fracture.

Another healthy crowd of 3,000 plus race fans showed up on July 31, 1954. The Mt. Pleasant News reported, “Fans filled the stands, lined the rails and were at overflow capacity in the infield”. Defending MVARA champion Roy Blinstrup of Rock Island, Rocky Williams of Peoria and current series point leader Ray Knepper of Belleville, Ill., were all in attendance. What also made the Mt. Pleasant race unique it was one of the few tracks in that period able to compete at night. James Wegescheider of St. Louis took the win. Hometown boy Dick Nau had given up driving duties and was now flagging the event. 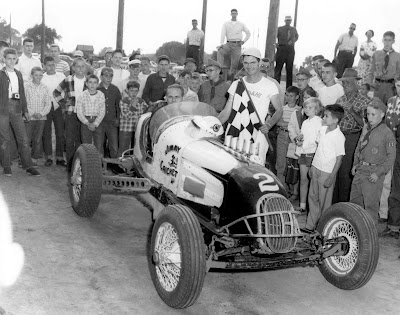 Bob Cleburg of Rio, Wis., grabbed Big Car honors on July 31, 1955 before another crowd estimated at 3,000. The annual event had become so popular the MVARA Big Car’s had become the grand finale of the Henry County Fair.

Once again, on July 28, 1956, the Henry County Fair came to a close with another large crowd. Indiana’s Ray Duckworth had a huge lead in this affair until Freddy Lambach cut into that margin. Duckworth’s engine gave out on the final lap allowing Lambach to speed by for the win in a thrilling finish.

Although the MVARA didn’t close out the Henry County Fair in 1957, another large crowd and a field of 20 cars came together on June 29th. Another future Hall of Famer, Red Hoyle grabbed the victory. In that field was Barney Knaack possibly the biggest driver of all time. It was said that Knaack stood 6’9” and was somewhere in the vicinity of 300 pounds.

On June 28, 1958, Ken Rubright, driving Merle Heath’s Chevy, tangled with Jerry Blundy and Herb Shannon in the second heat severely damaging Rubright's machine. He made lightning quick repairs and was able to win the feature. He would go on to win four times that season en route to the MVARA championship.


With the beginning of the 60’s, stock cars and jalopies were becoming more of the main attraction and with it came the slow demise of the MVARA and racing at the Henry County Fair. Another Big Car series, US Speedways, sanctioned races there for a few more years but the crowds and the car counts were considerably smaller.

In 1963 and 1964, the last two seasons for the MVARA, they came back to Mt. Pleasant for one last hoorah. They scheduled a two-day show on July 26 and 27, 1963 with crowds reported at 1,100, far below the 3,000 plus the fair had turned out in it’s hey days. Rollie Johnson took the win on the 26th over Kenny Wines, Ed Frese and Rocky Williams. The next day that lanky kid Jerry Blundy grabbed top honors over Tom Custer and Gene Cunningham, driving a Ranger-powered car.

On July 25, 1964, the MVARA made their last-ever appearance. It seemed only fitting that it was the last day of the Henry County Fair as well. The crowd, maybe sensing the end of Big Car racing in their small town, came out in support to the tune of 2,300 paid spectators. Ed Frese timed in at 25:55, better than the 22 other competitors that showed this day. Frese made it a clean sweep, winning his heat, semi-main and the feature event over Kenny Higginson.

Like the quote says, “All good things must come to an end”. By 1965, the Mississippi Valley Auto Racing Association had disbanded and gone forever was Big Car racing in Mt. Pleasant, Iowa at the Henry County Fair. 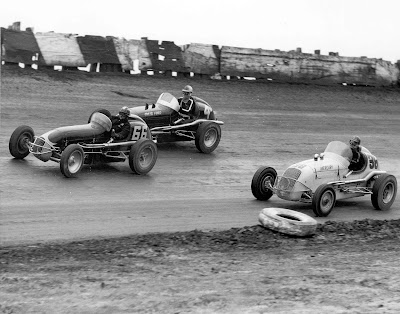