Jeff Aikey of Cedar Falls, Iowa, raced to his first Bud Open Late Model Shootout victory at the Winnebago County Fairgrounds Speedway on June 12, 2001.
Cedar Rapids, Iowa - With a couple of Open Late Model Shootouts in the books and two more coming up, I decided to look back at a couple of previous late model specials that were held right around this time in 2001.
The Budweiser Open Late Model Shootouts will long be remembered for top-name drivers, big crowds and exciting finishes. Two of those exciting finishes occurred on back-to-back nights eight years ago this very week.
The Winnebago County Fairgrounds Speedway in Pecatonica, Ill., hosted a Budweiser Open Late Model Shootout on Tuesday evening, June 12th. Jeff Aikey of Cedar Falls, Iowa was in the right place at the right time to pick up his first "Shootout" victory of his career.
The race looked to be a route as pole-sitter Steve Boley of West Liberty, Iowa, rocketed to the lead at the start and was off to the races. Even on a couple of restarts, Boley would open up full straightaway leads on his competitors. Unfortunately, engine failure found Boley and he retired after 33 laps of the scheduled 50 lapper. Gary Webb of Blue Grass, Iowa, took over the top spot and he too looked like the man to beat.
Meanwhile, Aikey, who started 10th, picked his way through traffic and finally got to second with 10 laps to go. It was then that a low tire started to slow Webb down and Aikey capitalized, passing the leader with six laps to go and finding himself taking the checkers first along with a $6,000 payday. It was Aikey's first "Shootout" victory ever.
The other story of the evening was Darren Miller of Chadwick, Ill., Miller had to qualify for the feature through the consolation and then starting at the rear of the field, made his way all the way to the runner-up spot before running out of laps. Rick Wendling of Hazelton, Iowa finished third after running second most of the night. Dennis Erb Jr. of Carpentersville, Ill., took fourth and Ryan Dolan of Lisbon, Iowa rounded out the top-five. 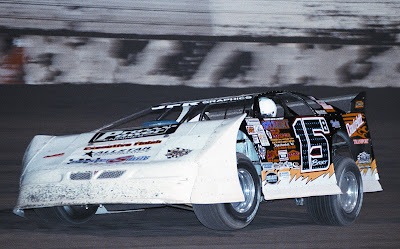 Muscatine, Iowa's Brian Birkhofer scored his second Bud Open Late Model Shootout win of the young season at the Dubuque County Fairground on June 13, 2001.
The following night at the Dubuque County Fairgrounds, it was a young man from Muscatine, Iowa, that showed the way to victory lane.
Brian Birkhofer displayed a little patience and used a mid-race caution to grab the checkers and $6,000 pay check. Like Saturday night, Steve Boley grabbed the lead and showed his backside to the rest of the field until lap eight when Coralville, Iowa's Denny Eckrich nosed inside of Boley in turns 1 and 2, raced side by side down the backstretch and then managed to sneak by for the lead coming out of the fourth turn. Eckrich then opened up an insurmountable lead by over half a track, lapping cars left and right in the process.
The first yellow of the night slowed the pace of the field, which was on lap 29. It proved to be a costly caution for Eckrich who had built such a huge lead. Birkhofer had managed to secure the fifth spot when the caution came out and with no lapped cars to overcome, it was time to go to work. Advancing one position as a series of yellows fell on laps 33, 34 and 36, Birkhofer moved past second place runner Gary Webb to move within striking distance of Eckrich with a dozen laps to go.
Birkhofer used several different lines in an attempt to get past Eckrich but found the cushion the best part on the track to make the winning move past Eckrich on lap 41. From there Birkhofer opened up a comfortable lead, winning by 20 car lengths in the end. It was already his second "Shootout" victory of the young season.
The previous night's winner and runner-up, Aikey and Miller, followed Birkhofer past Eckrich to finish second and third respectively. A disappointed Eckrich settled for fourth and Gary Webb took fifth.