1992 - Mike Smith of Jewell, Iowa had an impressive week, winning the Deery Brothers Summer Series for IMCA late models event at Southern Iowa Speedway on Wednesday, June 10 and then following that up with a win in the Bob Shryock Memorial at the Hamilton County Fairgrounds on Saturday, June 13. Smith passed Bruce Hanford midway through the 35-lap feature and then held off Ron Jackson to win in Oskaloosa and then stayed ahead of Bob Hill and Joe Kosiski to capture the $1,500 prize in Webster City.

1981 - Rodney Combs of Lost Creek, W.Va., was fast qualifier and Dave Bjorge of Sargent, Minn., was quickest around the track in the feature as I-70 National Speedway in Odessa, Mo., re-opened as a dirt track on June 13. Acquired by Weld Enterprises earlier in the season, the asphalt racing surface was covered with tons of dirt as the speedway started a new era of racing. Combs set a new track record (:19.67) and Bjorge would win the 50-lapper convincingly by 10 car lengths. 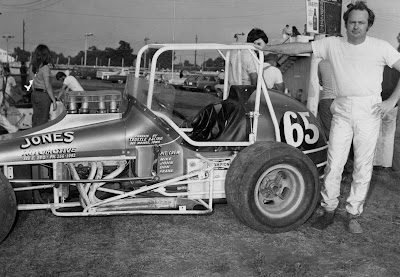 Bill Robison of Topeka, Kan., grabbed top honors in the super sprint feature at Fairgrounds Speedway in Algona, Iowa, on June 13, 1975.
1975- Bill Robison of Topeka, Kan., made the long haul north pay off as he grabbed the checkers in the super sprint main at the Fairgrounds Speedway in Algona, Iowa on Friday, June 13. The feature was completed with one restart, with Robison followed to the wire by Dick Forbrook by half a car length. Jim Edgington, fast qualifier Bob Hop and Stacy Redmond rounded out the top-five.
1969 - On what was declared "Mel Kenyon Day" by Davenport, Iowa Mayor John Jebens, Bobby Tattersall of Streator, Ill., took fast time (:15.43), won the fourth heat and then won the 30-lap feature as the USAC midgets made an appearance at the Mississippi Valley Fairgrounds on June 17. Merle Bettenhausen of Tinley Park, Ill., Bob Wente of Normandy, Mo., Mike McGreevy of Hayward, Calif. and Mel Kenyon, formerly of Davenport were the top five finishers.