1990 -Steve Kinser won the 2nd Annual Beertown Showdown for the World of Outlaws Sprint Cars at Hales Corner Speedway near Milwaukee on June 20. Kinser, driving his #11 J.W. Hunt Maxim, beat Sammy Swindell into turn one on the start and led all 30 laps to score the $12,500 payday. Sammy settled for second, Dave Blaney took third, Jeff Swindell grabbed fourth and Bobby Allen rounded out the top five.
1980 - Marion, Iowa's Fred Horn sped past leader Ken Walton of Viola, Iowa, on lap six to grab the lead and went on to win the Pepsi 100 at the Wapello County Fairgrounds in Eldon, Iowa on June 20. Horn would lap all but six of the 24 starters in picking up the $1,400 first prize plus lap money. Walton grabbed runner-up honors while Johnny Johnson of Morning Sun, Dick Schiltz and Ed Sanger, both of Waterloo, rounded out the top five. 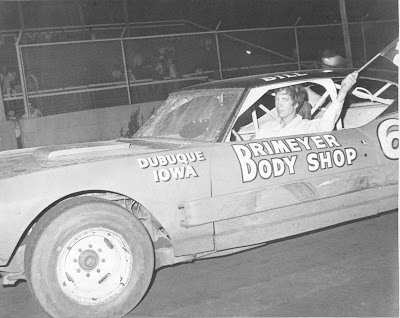 Bill Barthelmes of Troy Mills, Iowa was the late model winner in Dubuque, Iowa on June 22, 1975.
1975 - Bill Barthelmes of Troy Mills, Iowa won the late model feature at the Dubuque County Fairgrounds on June 22. Barthelmes grabbed the lead from Waterloo's Larry Wasserfort on lap nine and then held off Independence, Iowa's Glen Martin at the wire. Barthelmes' victory was even more impressive when it was learned that a broken motor mount on the last few laps caused his accelerator to stick. He finished the lap two laps by turning the ignition switch on and off.
1969 - Bob Tattersall won the 40-lap USAC midget feature at Joe Shaheen's Lil' Springfield Raceway on June 20. Tattersall scooted past Bob Wente of St. Louis on lap seven to take the lead and held on from there to extend his point's lead in the national standings. The best race of the night was for second with Wente, Jimmy Caruthers, Mike McGreevy and Chuck Arnold finishing in that order.