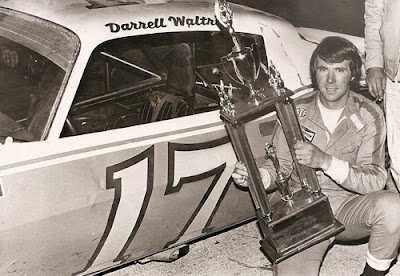 Darrell Waltrip poses with his trophy after winning the Midwest 300.

Salem, Ind. (November 5, 1972) – Darrell Waltrip, reduced to starting his backup car on the tail of the field, needed only 44 laps to move into first place as he captured Sunday afternoon’s wreck-delayed, darkness-shortened, Midwest 300 stock car race at Greater Salem Speedway.

The only serious injury was sustained by a spectator, Larry Bristow of Louisville, Ky., when a wheel from a car driven by Gene Payne of Owensboro, Ky., vaulted into the main grandstand during the second segment. Bristow was taken to a local hospital with a fractured arm and possible head injuries.

Waltrip brought two cars to the track – his “good car,” a 1969 Chevelle, and the ’65 Chevelle in which he’s won the past five races he’s entered at Salem. He elected to qualify the older car while Walter Wallace of Nashville, Tenn., drove the newer one.

Waltrip lasted only 19 laps in the first heat when the transmission locked, throwing him into a spin. Wallace, bumped in a second heat accident, had to drop out after 75 laps when bent sheet metal rubbed a tire near the point of it blowing.

“That’s why I didn’t want to run it (the ’69 model),” Waltrip pointed out. “We’d just gotten it out of the body shop, and it looked like it was going to be a rough day. I didn’t want to get it torn up. It’s an unreal car.”

However, wrecks eliminated so many qualifiers, that the ’69 Chevelle became the alternate starter. Waltrip was allowed to start 32nd in the 32-car championship field.

Chuck Engle of Columbus, Ohio, led the first nine laps of the finale, while Waltrip was passing 20 cars in the first five circuits. Dave Wall of Kansas City then led for a lap before Larry Moore of Fairborn, Ohio, moved in front on lap 11.

About the time Moore grabbed the lead, Waltrip moved into seventh spot. The Owensboro, Ky., native took fifth place on lap 14, then moved up to fourth on the 16th trip around. It took him another 13 laps to chased down Dave Sorg of Fort Wayne, Ind., for third, then he had to wait another 15 circuits before overhauling Wall.

Two laps later – on the 44th go-round – Waltrip caught more in slower traffic and seized the lead coming off turn four. He stayed in front – just barely- the rest of the way.

The first heat ended when Bobby Watson of Prestonsburg, Ky., had a tire blow and hit the fourth turn guardrail, triggering the eight-car melee. Moore beat Wall to the finish line, but Moore was penalized a lap afterwards for passing during a caution period. He was dropped to fourth place.

The second heat was stopped once when a car driven by John Sommerville of Louisville, Ky., vaulted the second turn guardrail - mowing down trees and landing on a golf course – and again when Payne lost a wheel. Engle got the victory after Sorg, like Moore, was penalized for passing under the caution.