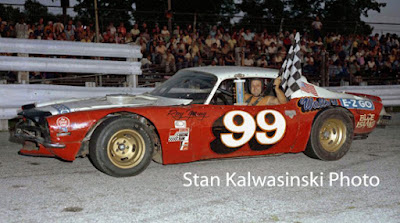 Meanwhile, a driver half of Young’s age, Tom Musgrave, 21, won the CDC percentage award in 1975. Musgrave, a second-generation racer, won nine straight features at the Grundy paved oval on the way to his second consecutive title.

The top-six feature finishers at the three participating tracks scored CDC points over the season with 51 drivers receiving points. A total of 68 feature races were run, but due to eight conflicting dates, the most races any one driver could have started was 60.

The scoring system went as follows –

The percentage award was calculated by dividing the total CDC points won by the maximum possible according to the number of features started.

Tom Jones ranked second in the final point standings, mainly on the strength of his championship drive at Waukegan, where he won a record-tying 19 features. Jones added another victory at Grundy to score the most CDC wins in 1975.