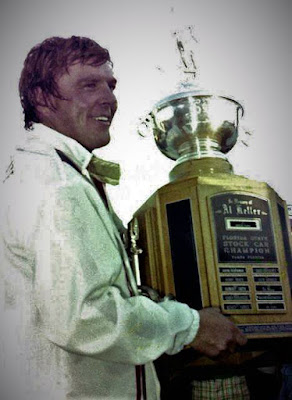 Trickle, of Wisconsin Rapids, Wis., securely tucked his Pontiac Trans-Am behind the leaders for 129 laps of the 200-lap race before making a move to the front, then, once he got the advantage, held off Dick Anderson for a one-second victory.

It was Anderson, of Hialeah, Fla., who Saturday night at Sunshine Speedway’s Gulf Coast Classic, kept his Camaro just far enough ahead of Trickle to win that 100-lap event.

“But I made my move too soon then,” Trickle said Sunday. “I got shut out and I wasn’t about to let that happen again.”

Trickle’s maneuver wasn’t accomplished quickly, however. From the time he slipped to the outside to take on Anderson, who was trailing Rick Knotts of Wayland, Mich., by a few feet, until he nosed into the lead, 15 laps had clicked off.

“I figured I’d make it in eight laps, but it’s a one-groove track,” said Trickle. “You can’t do much passing, so I just stayed in line until I could inch up a little. When I did get outside on Anderson, the front end started pulling.”

Trickle did that by popping out of an eight-car train, coming down on Anderson and back to the inside, holding position and then sending Knotts a message, via the front bumper of his car.

“I gave him a few taps just to let him know I was back there.”

When Trickle finally did gain the advantage, there was no question – at least in his mind – he’d hold on for the remaining 56 laps.

“Sure, I believe I had the fastest car out there,” he said. “At the end I was driving nice, easy laps. I could have run like that until I ran out of gas.”

Five other drivers finished on the same lap as Trickle, although Anderson was the only one within striking distance the final 10 laps around the third-mile paved oval.

LeRoy Porter of Orlando, driving a Camaro, was third followed by Dave Pletcher of New Port Richey, Tim Miller of Sarasota and Al Kuhn of Hollywood.

Three-time winner Ed Howe of Beaverton, Mich., finished 16th while defending champion Robert Hamke of Hialeah, was left sitting at the post when his Camaro refused to fire.

It was an exciting, smoothly run race watched in the bright sunshine by approximately 5,000. There were no serious accidents or delays, a fitting program and possibly the last promoted by Frank Derry, owner of the track for the last 16 years.