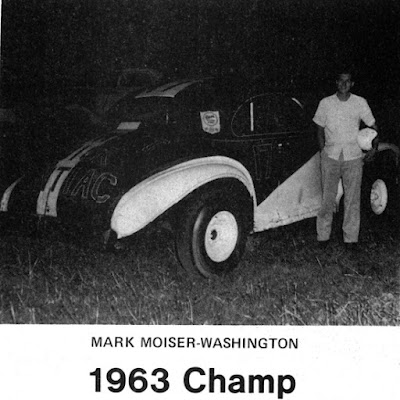 Ron Jackson of Burlington received two of the special awards, as well as a trophy for third place in the driver point standings. Jackson was honored as the most improved driver of the year and his pit crew received the award for being the best dressed crew.

He had four different cars wrecked and was on his fifth one when the season ended. Accidents put him in the hospital twice, but he said it was “worth it all” when he received the trophy.

Leroy Stuzman of Lockridge was named “rookie of the year.” The sportsmanship award went to point champion Mark Mosier of Washington. In accepting the honor, he said that although the trophy wasn't as big as his championship award it means as much in many ways.

Recipients of the special trophies were decided on by the vote of club members by mail ballot.

Al Samberg, club president, and Del Ross, track announcer, distributed the awards. They paid tribute to special guests attending, including the fairboards at tracks where races are held.

Drivers who finished in the top 10 in the point standings received trophies, with owners receiving identical awards. Included in the driver’s group were;


Reilly, who was seriously injured in a highway mishap near Sioux City, Iowa, attended the banquet in a wheelchair.

Championship jackets were presented to Mosier and his car owner, Warren Stewart of Washington. Stewart said that since he received a similar jacket last season, he wished the club would present it to Johnny Mullink, who finished second in the point standings.