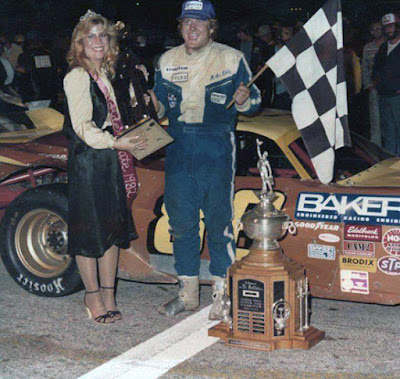 Mike Eddy led from start to finish in winning the Florida 200.

Tampa, Fla. (November 6, 1981) – There was not a single lead change in Mike Eddy’s Florida 200 victory on Friday night at Golden Gate Speedway.

But that doesn’t mean there weren’t moments of excitement for the estimated 6,000 race fans looking on – or for Eddy.

How about avoiding a wildly spinning car during the early part of the 200-lap race? That’s what Eddy did, escaping disaster to remain on the track.

The Midland, Mich., driver, who was fast qualifier with a time of 16.339 seconds around the third-mile oval, was also fortunate to spin out just as a caution period began, meaning he stayed at the front of the pack instead of being sent to the rear.

“There was no room for error out there,” Eddy said afterwards. And he wasn’t kidding.

There were numerous yellow-flag periods, and three times the race was halted temporarily so wrecked cars could be towed to the pit area.

Howe, a four-time Florida 200 winner, wasn’t too upset, since he owns the car that Eddy drove.

But just everyone else who competed in this grueling contest would have preferred a higher finish.