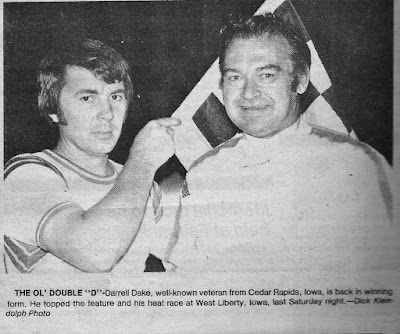 West Liberty, Iowa (June 18, 1977) – Darrell Dake of Cedar Rapids, Iowa, proved Saturday night he can still get the job done.
Before a crowd of 3,600 race fans, Dake made a clean sweep of the late model program at the West Liberty Fairgrounds.
This was Dake’s first win since his tragic accident last August at Hawkeye Downs which left him with severe injuries and threatened to end his legendary career of more than two decades.
“Double D” as he is aptly nicknamed, has made steady progress on the track the past month and the victory marked a milestone in Dake’s determined goal to make a comeback on the Midwest racing circuit.
Dake took advantage of his pole starting position in the feature to jump into the lead on the first lap, a lead he would never surrender.

Ron Hemsted of Lone Tree, Iowa, Tom Hearst of Wilton, Iowa, and Duane Steffe of Colona, Ill., battled for second place the entire 25 laps, often three abreast, but Dake was able to fend off the trio who were at his bumper the entire time.
Mike Niffenegger of Kalona, Iowa, winner of last week’s feature, had torn up hi car at Davenport the week before so he wasn’t in competition Saturday. This caused him to lose some ground in the point standings with Tom Hearst although he still maintains second.
Bill Schwader of Riverside, Iowa, was the consolation winner while heat wins went to Hearst, Dake, Ken DeGood of Iowa City and Steffe.
Kenny Fenn of Washington, Iowa, made it feature win number eight in sportsman competition. Starting on the pole, Fenn wouldn’t be touched by any of his challengers.