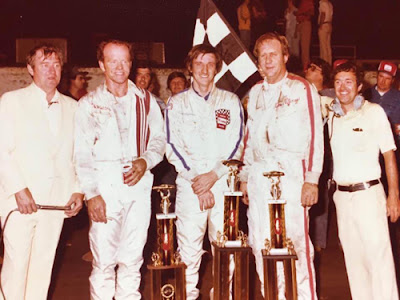 Des Moines, Iowa (June 20, 1979) – An Okie from Muskogee and a Missourian from Springfield had been the winners in the first two National Speedways Contest Association late model stock car races, but Iowans finished in the top five spots at the Futurity 100 race at the Iowa State Fairgrounds on Wednesday night before a crowd of 4,500.

Curt Hansen of Dike, Iowa, would take the victory after a race-long battle with Larry Phillips of Springfield, Mo. Hansen would collect $2,000 for winning the 100-lap event.

Hansen, who qualified sixth fastest in time trials, would start on the pole after the top six qualifiers would be inverted. The 34-year-old pilot would lead the first 53 circuits of the 100-lap affair until Phillips, who had run second and third at various stages of the race, took over.

Hansen would manage to stay close to Phillips’ bumper for the next 20 laps and when the Missouri ace’s axle broke on lap 75, Hansen would inherit the top spot again and cruise from there.

Hansen would win by a half a lap over second place finisher Mike Niffenegger of Kalona, Iowa, and Ken Walton of Viola, Iowa. Verlin Eaker of Mechanicsville, Iowa and Bill Zwanziger of Waterloo, Iowa, would round out the top five.

Tom Laster of Muskogee, Okla., winner of the first NSCA-sanctioned event and the series’ current point leader, was not in attendance.

Ken Walton was the fastest guy around the track in time trials, touring the half-mile in 25.018 seconds. A.C. Saint of Tulsa, Okla., won the 15-lap consolation.