1976 – Solid Victory for Shuler in Series Opener at WIR 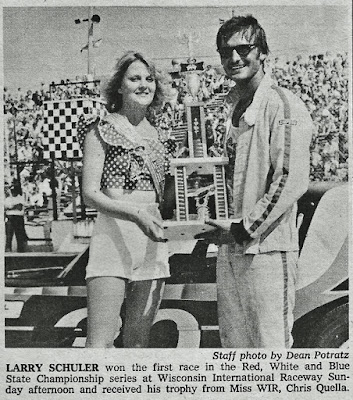 Kaukauna, Wis. (June 13, 1976) - Larry Schuler, a 23-year-old fireball from Lockport, Ill., swept to victory in convincing style Sunday afternoon at the Wisconsin International Raceway as he wheeled his low-slung 1976 Camaro to victory in the “Red, White and Blue” State Championship Series for late models.
A crowd of nearly 7,000, the largest at Kaukauna since 1968, watched in amazement as Schuler picked off the Midwest’s best short track stock car pilots in his surge to the front.
Schuler, the afternoon’s second fastest qualifier, battled with Tom Reffner of Rudolph, Wis., in the early stages of the race as the pair moved to the front.
Reffner had earlier topped the 46-car field in time trials with a time of 20.88 seconds around the half-mile paved oval.
However, minor mechanical problems slowed Reffner after 10 circuits in the 50-lap event and he would finish a distant ninth, a full lap behind Schuler.
Gary Hemmerling of Beloit, Wis., punched his 1973 Camaro into the lead and stayed in front until lap 15 when Rich Somers of Stevens Point, Wis., gunned hi ’72 Mustang into the top spot.
Schuler, meanwhile, had worked his way to third and two laps later whizzed past both Dick Trickle of Wisconsin Rapids, Wis., and Somers.
“The car ran good last Thursday night here, but today we changed tire and it went even faster,” Schuler said afterwards from victory lane.
“I had to add 500 pounds to my car,” Schuler noted. He was required by Wisconsin rules to add the weight to meet the minimum weight rule in the state. When he competes at Illinois tracks, the car weighs under 2,750 pounds, much lighter than the rules in Wisconsin require.
The added weight didn’t affect his performance at all as Trickle chased him for the final 33 laps, but finished four car-lengths off the winning pace.
Mike Miller of Wisconsin Rapids, Wis., wrestled third spot away from Joe Shear of South Beloit, Ill., with John Ziegler of Madison, Wis., fifth.