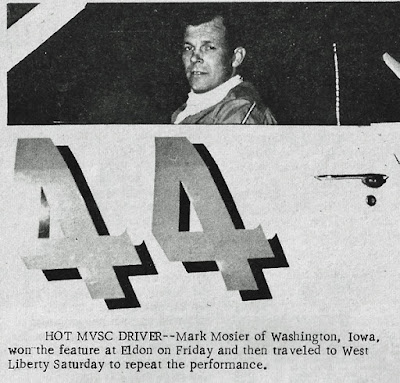 Eldon, Iowa (June 11, 1971) – Mark Mosier captured the 20-lap Mississippi Valley Speed Club super stock feature at the Wapello County Fairgrounds on Friday night.
The Washington, Iowa, pilot powered his #44 Chevrolet out front at the drop of the green and was never headed, taking the checkered flag for his first victory of the season on the big half-mile.
Mel Morris of Atalissa, Iowa, provided some good, tough competition for Mosier. At times, they were bumper to bumper in nose to tail fashion, but Morris couldn’t overtake Mosier.
Following Mosier and Morris across the finish line were Bob Helm of Andalusia, Ill., Pokey West of West Chester, Iowa and Bill Newman of Burlington, Iowa.
Newman added a couple of trophies to his collection by winning the 5-lap trophy dash, slightly ahead of Dan Dickey of Packwood, Iowa. Newman would also score the victory in the second heat.
Mosier copped the 8-lap first heat ahead of fellow townsman Ron Perdock and Helm was the winner in the third heat.
Tom Stewart of Washington, Iowa, took home the win in the 6-lap Australian Pursuit and “Big” John Moss of Iowa City led all the way to the checkers in the consolation.