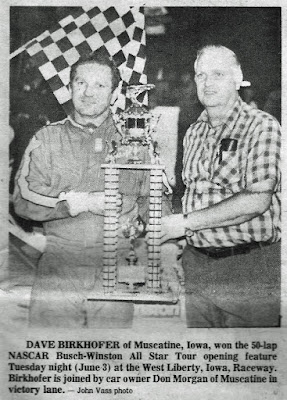 West Liberty, Iowa (June 3, 1986) – Dave Birkhofer of Muscatine, Iowa, drove quickly to the front from his fifth row inside starting position, then held off several challenges along the way to win the 50-lap NASCAR Busch-Winston All-Star Tour late model feature Tuesday night at West Liberty Raceway.
It was the first of 14 All-Star Tour events for the NASCAR late models.
The late model feature had barley began when trouble struck on the front stretch. As the 26-car field was completing the first lap, the cars of Rick Wendling of Hazelton, Iowa and Bob Lekander of Burlington, Iowa, came together midway down the front stretch.
Wendling’s car slammed the wall sideways at the flag stand and both continued down the cement wall between the track and the grandstand. Both cars climbed the wall with their right-side tires and Wendling’s car got into the fence atop the cement wall.
Neither driver was injured in the spectacular accident but both were retired for the evening and track officials had to phone an electrician to restore lighting at the entrance to turn one after Wendling’s car tapped a light pole during the skirmish.
Birkhofer moved quickly to the front, followed by Roger Dolan of Lisbon, Iowa and Rollie Frink of Davenport, Iowa, who went three-wide into turn one of lap 11 with Birkhofer coming out of turn two with the advantage he would never relinquish.
Frink would retire just after the half-way point, but it remained a battle with Dale Fischlein and Curt Martin, both of Independence, Iowa, joining in, making it a four-car fray much of the remaining distance.
In other action, Greg Roorda of Mitchellville, Iowa, won the IMCA modified feature, Jay Hanken of Monticello, Iowa, was the street stock winner and Robert Christen of Cedar Rapids, Iowa, was king of the bombers.