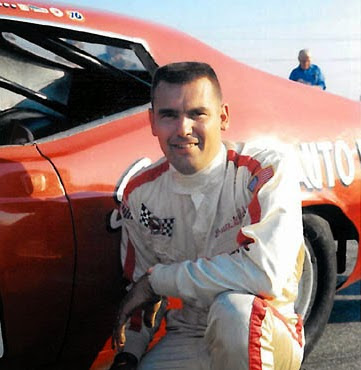 Bruce Gould
West Salem, Wis. (June 22, 1973) – The Automobile Racing Club of America new model stock cars returned to the 5/8-mile paved oval of La Crosse Interstate Speedway after a year absence and their return proved to be very exciting as Bruce Gould and his 1971 Ford Torino emerged the winner and $825 richer.
Twenty-one cars took the green flag for the 100-lap feature, with Gould taking the lead from his front row, outside starting position. Gould held the lead with Bobby Watson, Kenny Reiter, Dave Dayton and Ron Hutcherson right behind him.
On lap 18 as the leaders were moving through traffic, Frank Sandin spun in the fourth turn forcing the leaders to go in all directions to avoid him. However, only Dayton made contact with Sandin and had to pit under yellow for three laps to bend sheet metal away from his tires.
Because of the melee, Watson would inherit the lead with Reiter, Gould, Hutcherson and A. Arnold behind him. Dayton pulled out of the pits just as the leaders were going by him and he settled in between Reiter and Gould. The green flew once again on lap 22 and once again and it appeared to be a six-car battle though Dayton was three laps down.
On lap 23, Hutcherson moved past Gould for third while Watson and Reiter began pulling away. The race continued in that order until lap 41 when Dennis Caves spun his car in turn one, once again bringing out the yellow.
By lap 55, it was apparent Reiter was having issues with his Dodge Charger and he began dropping back, allowing Watson to have a full straightaway lead by lap 70 and also allowing Gould and Hutcherson to move up on Reiter.
On lap 95, Gould flew past Dayton going down the backstretch and was now on Watson’s bumper. On lap 97, Watson’s throttle would stick going into turn one and he locked it up, hitting the wall at a 45-degree angle, bouncing off the wall and coming to rest in turn two.
Gould would inherit the point and hold steady for the remaining three laps to take the win. Arnold would take runner-up honors with Hutcherson third, Cliff Nema fourth and Larry Anderson fifth.