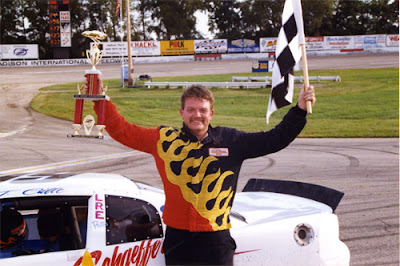 
“Coming into Friday night, we knew we really had our work cut out for us. We knew we had to go there and run hard and fortunately, we finished in front of him (DiMaggio),” Gille said.


Going into the 40-lap finale a week ago, DiMaggio held an 18-point lead over Gille and a 58-point advantage on Hanson.


That lead disappeared by the time the feature had rolled around. Gille, of , held a slim lead after DiMaggio’s car came up 4 pounds too light. DiMaggio's car had a new engine after he blew his in the second of two Labor Day 50-lap features.


DiMaggio’s qualifying time was thrown out, and the driver had to start in the rear of the field.


“They threw the book at us,” DiMaggio said Thursday.


DiMaggio caught up to Gille by the 32nd lap, but the cars tangled in turn two, forcing a caution and sending them to the rear. Hanson spun out as he was trying to take the lead on lap 35. The driver dropped back and finished eighth.


Gille finished 12th, but he held off 13th-place DiMaggio to claim the track title by four points.

At other area tracks;


: Former track champion Ron Bishofberger of clinched the late model title with his second-place showing Saturday. Bishofberger held off defending champ Andy Wendt of , who placed third in the race and finished 10 points behind on the season. Dave Oswald of won the sportsman division and ’s Justin Nottestad won the international title.


Jefferson Speedway has one race to go this year, the 19th annual Wisconsin State Championships with $29,000 in prize money. The track opens at today and Saturday.