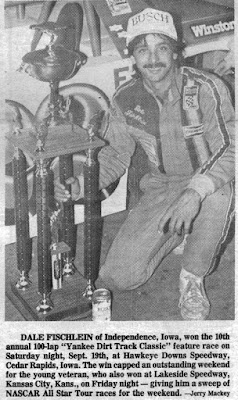 (September 19, 1987) - Dale Fischlein found the perfect way to say good-bye Saturday night. Fischlein, a stock car driver from , won the Yankee Dirt Classic at Hawkeye Downs and then started planning for a major career move.
He has sold his dirt track equipment and will head for in hopes of finding a ride on the paved circuit.
“It's a big gamble,” Fischlein said. “I guess the way I look at it is I don’t really have anything to lose. I feel now is the time to do it.”
An often-frustrating season ended in victory for Fischlein. He grabbed the lead on the 25th lap then sped away from the field to win the 100-lap Late Model feature in the $35,000 event Saturday night.
"I couldn’t believe it,” Fischlein said. “Ever since the season began, we’ve had all the bad breaks. But the track just came to the car. We could turn the car anywhere we wanted to. It was just a matter of it staying together. We got into some pretty heavy lap traffic but we could drive anywhere we wanted so we got past it pretty easy.”
Fischlein started on the fourth row. It took him 24 laps to catch Dave Chase of , but once he did he was unthreatened on the hard, slick track.
Fischlein was the seventh fastest qualifier for the feature of the two-night event and halted Tom Hearst’s win streak in Yankee Dirt Track Classic. ’s Hearst, the only multiple winner in the 10-year history of the event, finished sixth this time. He won titles in 1982, ‘85 and ‘86.
’s Steve Kosiski, Jeff Aikey of Cedar Fails, Dave Birkhofer of and Rollie Frink of rounded out the top five Saturday night.
’s Roger Dolan, the national champion in NASCAR’s Winston Racing series, had the fastest qualifying time and started 10th, but was never a factor in the feature.
Fischlein has no definite plans, but is ready to take some chances.
“I haven't got anything lined up,” he said. “I'll head to and try to make myself known.
“It’s not my goal to race in the for 20 or 30 years. Racing is my career, it’s not my hobby and this is the next step for me.”
“I've learned a lot from some of the top drivers in the . I ran carts for nine years before I started racing oval track and I learned a lot there, too. I’ve just got to keep moving.
If things don't work out in , Fischlein said he has an offer to drive a dirt track car here next season.