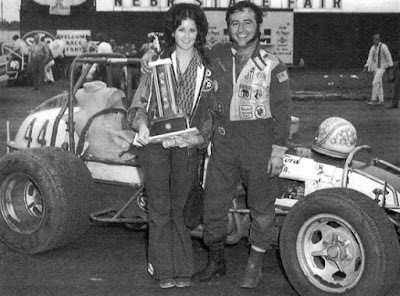 Always colorful Chuck Amati won the IMCA sprint car feature at the Nebraska State Fair.
Lincoln, Neb. (September 3, 1972) – Chuck Amati of Greenfield, Tenn., ended Thad Dosher’s domination of the Nebraska State Fair IMCA Sprint Car Championships on Sunday afternoon, with a thrilling triumph in the Nebraska Speedway Sweepstakes.
Amati, who started on the outside of the 10th row, patiently worked his way through the pack until he moved into third place behind Dosher and second place Earl Wagner on the 23rd circuit.
Wagner momentarily moved past Dosher, as he had four times before, on lap 25 and when Dosher challenged to regain the lead, Amati zipped past both drivers into sole possession of first place, a spot he would not relinquish.


Amati, who qualified for the feature by winning the third heat, recorded his first IMCA victory of the year.
Dosher, who won the feature, the STP trophy dash and heat race on Saturday, continued with his dominance on Sunday, winning the trophy dash and his heat race.
The Topeka, Kan., driver eclipsed the track record he set on Saturday in the 6-lap trophy dash, with an effort of 2 minutes and 27 seconds. He also bettered the Fairgrounds’ record for an 8-lap race with a time of 3 minutes and 18 seconds in the second heat.