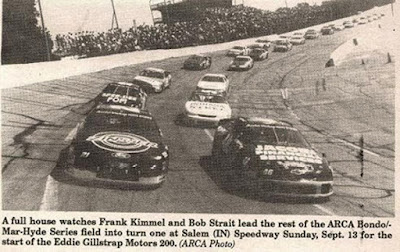 Salem, Ind. (September 13, 1998) – It seemed, almost, like the perfect script. With 10 laps to go, hometown hero Dill Whitttymore was holding off Winston Cup superstar Ken Schrader while the crowd roared.
However, a good bit of that roar belonged to the other local hero, Frank Kimmel, who, by now, had checked out on the aforementioned dynamic duo.
After brushing the wall early on, Kimmel bounced off, and bounce back big to dominate the Eddie Gilstrap Motors 200 Sunday afternoon at Salem Speedway claiming his ninth ARCA Bondo/Mar-Hyde Series victory of the season and 14th of his career.
“I slipped in my own oil up there between turns three and four,” said Kimmel from victory lane. “A clamp was loose on one of the oil fittings and I slipped and hit the wall. Fortunately, we didn’t tear it up too bad and got it fixed without losing a lap.”
“This car stuck anywhere I needed it to. We’ve been working real hard on our shock and springs setup, and it showed here today.”
Kimmel was forced to work from the extreme tail-end after pitting twice to cure the oil leak, but quickly showed his strength by passing the entire field to take the lead on lap 53. Additional pit stops later in the race shuffled the current ARCA point leader back in the lineup, but the Jefferson, Ind., driver, assisted by extremely quick pit stops, raced back to the point every time to lead 135 of 200 laps.
Whittymore faded with 5 laps to go and Schrader, who relieved the injured Bill Baird, finished 2.5 seconds back in second place. “The 46 car was unbeatable today,” Schrader stated afterwards. “There was no way we were going to outrun him today.”
Baird qualified the car in fourth and started the race for points but bailed out at the first caution to make way for Schrader, who had finished fourth in the Winston Cup start in Richmond the night before.
Veteran Bob Schact, the last car on the lead lap, finished third ahead of Rick Groetsch and Wes Russell to complete the top five.
Kimmel collected $14,220 for the victory.