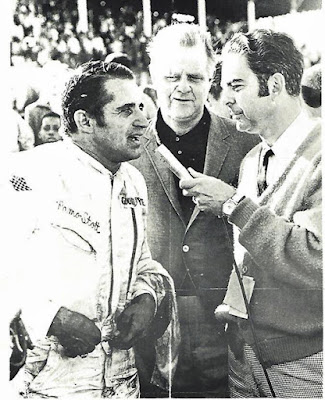 (September 21, 1969) – If Ramo Stott wins many more races this season he’s going to have to buy a bus.
Every time the Keokuk, Iowa, speedster wins a race, he plasters a decal on his 1969 Roadrunner…and he’s fast running out of room.


Sticker number 14 was pasted on his car Sunday afternoon at Dayton Speedway when Stott roared to victory in the Dayton 500, a 250-mile chase for the Automobile Racing Club of America (ARCA) late model stock cars around Dayton’s high banked half-mile track.


Ramo is not only fast running out of sticker space he almost was running too fast and ran out of room midway through Sunday’s matinee.


Stott was leading on lap 361 when Don Violet popped a tire in turns three and four and did a tail-stand on the guardrail in front of Ramo.


“All I could see was me goin’ over the gosh durn wall,” said Ramo. I was going right at him, but I hit him with a glancing blow. I thought for sure I cut a tire when I hit him, but we checked it out in the pits and everything was okay.”


Things were okay on the track, though. Ramo lost his lead to defending champion Benny Parsons while Stott’s crew was making a rubber check.


Parsons proceed to build a two-lap lead over Ramo and Bobby Watson’s newly-acquired 1970 Dodge Super Bee, but the tires would be the end for Parsons too.


The right front on his 1969 Ford Torino popped on lap 422 coming down the backstretch and Benny slammed into the turn three guardrail, ripping out his oil pan. He would spend the final 78 laps of the race making as many pit stops as a car full of kids on vacation.


Watson and his Super Bee were buzzing and cutting into Stott’s lead, but time (and laps) was running short. He cut the margin from 25 seconds to 14 when the checkers waved.


“We lost the race when we missed qualifying,” Watson said afterwards. “While everyone was qualifying on Saturday, we were still putting the engine in.” Andy Hampton started in the Super Bee and Watson relieved him after 260 laps.


“Since we didn’t qualify, we had to start 30th (out of 34-car field) and it took us too dang long to work our way up,” Hampton added.


Les Snow of , put his 1969 Plymouth Roadrunner on the pole and Stott started on the outside of the front row. Parsons tore his driveshaft into bits and pieces during practice and worked four hours to get it back together. With one minute left in qualifying, Parsons took to the track and landed the fifth position.


Snow led 138 of the first 140 laps until a wheel bearing cost him agonizing minutes in the pits and knocked him out of contention.


Parsons led from lap 150 to 283 until Stott took command after Benny pitted. Ramo was the boss through lap 361 - then came the Violet tire-popping and Benny appeared long gone until his tire issues and Ramo was checkered flag bound.


“She really ran good,” Ramo said from victory lane. “I didn’t worry a bit. The tires were a concern near the end, though, and the track was getting slick toward the end.”


Stott, a first year man in ARCA, after fruitlessly chasing Ernie Derr in the IMCA ranks for years and years, is pulling in the money like a crooked card dealer. His paycheck at on Sunday was for $2,200…just enough to buy a new bus.