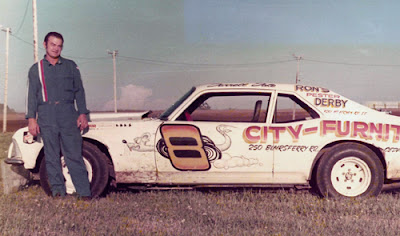 Darrell Dake - Dennis Piefer Photo
(September 8, 1974) - There is something about the Freeport Raceway, which brings out the best in drivers from .
Drivers from the Iowa city grabbed the top four places in Sunday night's first ever “Freeport 100,” with Darrell Dake pocketing the top prize of $1,200.
Dake, starting in 16th place in the 27-car field, in his 1973 Chevy Nova, took over the lead from resident Bill Zwanziger on the 62nd lap. He then held off Zwanziger, season point leader Ken Walton of Viola and Cedar Rapids' Verlin Eaker the rest of the way and took the checkered flag with a lead of less than a car length over Eaker. Zwanziger held on for third place and Walton placed fourth.
The race, which created the most local interest on Sunday’s program, was a special 15-lap trophy dash featuring ’s six fastest drivers. Jim Jeffries won it, edging Jim Leverington and Bill Lameyer. Jake Schmoll was fourth.
’s Steve Lance was the winner of Sunday night’s 15-lap consolation race for non-qualifiers in the 100-lap feature. Finishing behind Lance was Gary Hunt of Franklin Grove, Tom Greenlee of , Sam Fooshee of and Leverington.
All in all it was a highly successful weekend for Leverington, who was also a winner in Saturday night's second 15-lap heat race. Greenlee won the first heat race, and ’s Don Bohlander won the trophy dash. The first of Saturday's two-25-lap features went to John Aurivins of Hazel Green, , and the second feature winner was 's Bob Grenoble.
’s Sam Reakes was fast qualifier for the evening with a timed lap of 26.19 seconds.