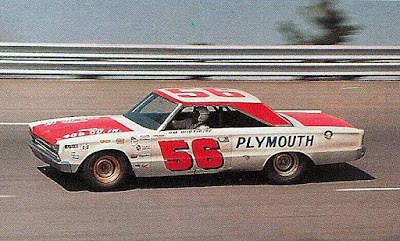 
Norm Nelson, the current leader in the point standings, did finish ahead of Don White, his nearest rival for the national championship, but Hurtubise captured the 250-mile late model stock car race yesterday at Langhorne Speedway.


Hurtubise, a 33-year-old veteran campaigner of all types of racing, scored his first victory on asphalt at the ‘Home’, finishing two full laps in front of Billy Foster.
Hurtubise, who hails from , NY., finished second to Paul Goldsmith in the same race last year and second to his boss, Nelson, in the 150-miler this past spring.


Hurtubise, driving a 1966 , owned by Nelson, enjoyed a comfortable lead for the final 50 miles of the race. It was just a question of whether his equipment would hold up.


A crowd of 12,500 fans watched Nelson win the pole position in the time trials in his ‘66 with a qualifying effort 32.975 seconds (109.173 mph).
White started second in a ’66 Dodge and zoomed into the lead on the first lap. He stayed in front until the 11th lap when Nelson passed him coming out of the third turn.


Meanwhile, a few car lengths back, Hurtubise was making his move. He started third but fell back to fourth behind Foster. However, on the 18th lap, Herky caught Foster and by the 43rd lap, he edged past White to take second place. Three miles later he passed Nelson to forge into the lead.


Hurtubise stayed in front until the 168th lap when he made his second pit stop. White took command again until the 182nd mile when his engine blew and he was forced out of the race.


Hurtubise regained the front running position, made a quick pit stop under caution in the 185th lap for some insurance fuel and then “was off to the races.”


Nelson was the only one with a chance to catch Hurtubise, but he lost whatever chance he had when he made a rather long pit stop in the 190th lap. Nelson finished third, four miles behind the winner. Nine cars were still running at the finish.


It was a big day for the Chrysler family as Plymouth or Dodge cars captured the first eight positions and 13 of the first 14 places.


Although 39 entries had been received for the race, only 20 cars showed up, adding more proof that if the United States Auto Club wishes to stay in stock car racing, it had better revise its schedule to avoid conflicts such as occurred yesterday.


Many drivers were committed to race elsewhere, while others in the didn’t think it was worth it to ship east for the one race.


The caution flags were out for 17 laps and the race was stopped after the second lap for a 25-minute delay when Terry Parker spun out on the second turn, brushed the guard rail and his car burst into flames. He escaped unhurt, but the race was halted until the fire was extinguished, the car removed and the track surface cleaned.


Spin-outs caused the caution flags to be displayed, three other times, but fortunately no one was hurt.


Hurtubise, who set a torrid early pace, with speeds averaging better than 105 miles per hour, appeared to have made a disastrous “boner” when he failed to take advantage to make a pit stop under the yellow, right after 150 miles. His pit crew apparently wasn't prepared for him. He did pit some 10 laps later and lost his lead to White.


But then White’s engine blew and his teammate, Nelson, didn’t seriously challenge, so Herky, the darling of the fans, coasted home.