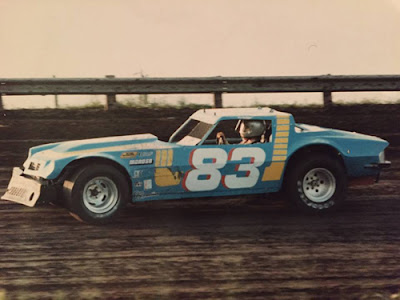 
West Burlington, Iowa (July 4, 1988) - Willy Kraft enjoyed a perfect evening of racing Saturday, but in the flick of an eye his domination nearly turned to disaster.
The Lakefield, , driver led from start to finish of every race he ran to take home the checkered flag as the United States Auto Club late models invaded 34 Raceway for the second stop on their Iowa Firecracker Jamboree tour. However, it was the final seconds of the feature race that nearly saw Kraft's triumph tumble to tragedy.
Kraft led the first 39 laps of the 40-circuit feature with virtually no trouble, but two-time defending USAC national champion Billy Moyer of , began to close fast during the final three laps. Kraft still had a comfortable lead entering the final turn when the engine of 's Steve Keppler blew near the finish line.
Kraft slowed noticeably while Moyer forged ahead, diving inside, and the two passed under the checkered flag nose to tail.
Completing the top 10 were Larry Phillips of ; defending champion Ken Essary of ; Ray Guss Jr. of ; Tommy Joe Pauschart of ; Charlie Sentman of ; Johnny Johnson of Wapello; Jeff French of ; and Dick Potts of ,
In all, 29 drivers from as far away as and vied for a share of the $53,000 purse. The second annual event attracted a standing-room-only crowd, one of the largest in 34 Raceway history.
The evening belonged to Kraft, who nearly lapped the field in his heat race before running away with the main event. Kraft started on the pole of the feature and quickly built a large lead. After four laps his blue and yellow No. 83 was already into lapped traffic, with Phillips and Moyer in hot pursuit.
Phillips began charging 10 laps into the race and he and Kraft took off away from the rest of the pack. Phillips nearly passed Kraft on the inside on lap 21. However, Phillips was forced off the top of turn 2 on lap 31, and by the time he regained control Moyer had passed and Phillips was out of the picture.
That turned the race over to Kraft and Moyer for the final nine laps. The two passed through the final group of slower cars on lap 38, leaving Kraft with an eight car-length lead and a clear track ahead for the final two circuits.
That is, until Keppler's trouble on the final straight. Keppler had the only difficulty as the race was contested under the green flag from start to finish for the second straight year.
Essary, Potts, Kraft and Guss earned heat victories while Phillips won the last-chance qualifier. Moyer was tops in time trials, breaking the track record by more than a full second for the second straight year, touring the 3/8-mile oval in 15.539 seconds.
Feature races only were conducted in 34 Raceway's four other regular classes, with triumphs belonging to Danny Fielty of (hobby stock), Donnellson's David Buford (pro stock), Lance Stott of , (sportsman) and 's Bill Dusenbery (super modified).