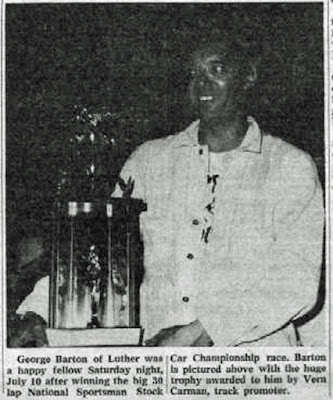 
The $2,000 purse event drew 39 entries for the time trials held on Friday. Barton also placed first in the time trials with a last clocking of 17.16 seconds followed by Lyle Platter of Boone and Clarence Cooper of .


The 30-car main event was quite a sight for the more than 3,000 plus race flans rooting for their favorite car and driver. Four restarts were necessary before the race was underway.


Barton on the pole position, took the lead on the first lap and set the fast pace for the long and grueling 30-lap contest. Ramo Stott, noted driver racing out of Keokuk, was in the line up and placed second in the race.


In the heat events the action was fast and furious as those drivers were trying to place to get into the main event.


In the first heat race of the night George Barton rolled his car over on its side at the start of the race. Barton was penalized and sent to the rear of the pack for “halting the race”. He poured on the gas and still won the event. He followed by Paul Weilander, Ramo Stott, Willie Kluss and George Derry.


Paul Lambert of Perry took the fifth heat, second was Keith Farrell of Eagle Grove and third was LeRoy Collins of .


The “B” main was won by Clarence Cooper. Trailing Cooper were Ray Busch of Beaver, Dean Schroeder of Clarion, LaVern Lindgren of ; Dick Sanders of Des Moines and Bob Post of Boone. During the "B" main event Sam Eslick driving a Harcourt owned car was leading all competitors when he lost control in the number two turn and went out thru the fence and disappeared from the view of racing fans. Eslick was not injured.


This was the type of action that took place all thru the events of the National Championship races on Saturday. Fans will remember the town of Dayton and Dayton Speedway for a long time with the excellent racing action put on by race manager Vern Carmen, his crew, the drivers and car owners.