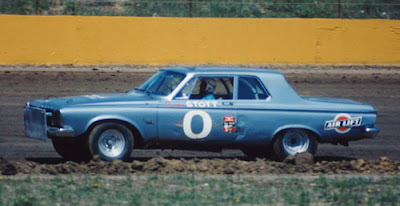 Ramo Stott
Donnellson, Iowa (July 24, 1965) - Ramo Stott pushed his 1965 Plymouth to a fast victory over Ernie Derr and the rest of the field in the 50-lap feature race of the IMCA late model stock car races at Donnellson's Lee County Fair Saturday night.


Stott, of Keokuk, won the race with a time of 24 minutes and 46 seconds while Derr, also of Keokuk, finished next in his Dodge. Lenny Funk from , was third.


In the fourth and fastest heat of the night, Stott barely beat Derr with a time of 2 minutes and 23 seconds.


Derr had the lead in the initial lap of the five-lap race, but Stott passed him in the second and stayed ahead. Bob Jusola and Blaine Morrow followed the leaders.


The first heat was a reverse of the fourth, with Derr winning and Stott coming in second. John Mickey ended up third and Lewis Taylor fourth.


Ole Brua claimed the third heat, as Morrow, Bill Gibson, and Leon Fellers came in behind.