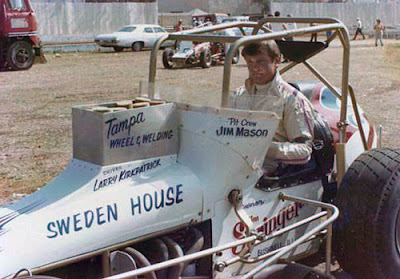 
Kirkpatrick, a sprint car driver, suffered extensive head injuries Sunday after his car collided with several other sprint cars in a feature race in .


“He was lapping some other slower cars, they slid in front of him and Larry flipped,” explained Ned Kirkpatrick, father of the deceased. Kirkpatrick, 28, had been driving sprint cars for about four years and was successful on the regional circuit.


Following his crash and injury Sunday, Kirkpatrick was rushed to , where he remained until yesterday.


Kirkpatrick had finished second in the point standings in the International Motor Contest Association (IMCA) in 1974 and because of increasing success joined the United States Auto Club (USAC) this year.


“He had aspirations of racing at in the 500 someday,” said his wife, Brenda.


Kirkpatrick had earned the right to drive in dirt championship races in the and would have begun competition next month.


Kirkpatrick had raced on tracks from to in his quest to become one of the nation's top drivers.


“He died doing what he wanted to do,” said his wife.