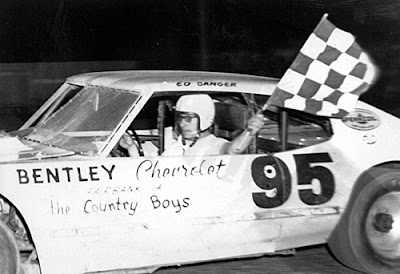 
“That early lead is what won it for me,” said Sanger, who had just captured his fifth feature in a week and also his fifth main event, triumph of the season.


Sanger, the second-leading late model point-getter going into the evening, started on the outside front row with top point driver Bill Zwanziger on the inside.


“Bill and I were neck and neck out of the second turn on the first lap,” recalled Sanger. “It was the better traction on the high side that let me pull away.”


“With a light car with a heavy engine, you can really tell when you are getting good traction; the car really takes off on you.”


Sanger came out with about a three car length lead on the first backstretch about the same margin he had over runner-up Zwanziger when the 35-lap event ended.


Sunday’s win climaxed a $4,000-plus week Sanger indicated. He started it off last Monday night with an $800 feature win at and followed with victories at Oskaloosa on Wednesday, , on Thursday, on Friday and a second place finish to Hansen on Saturday at Eldon.