1958 - Top Drivers Raced Under Other Names 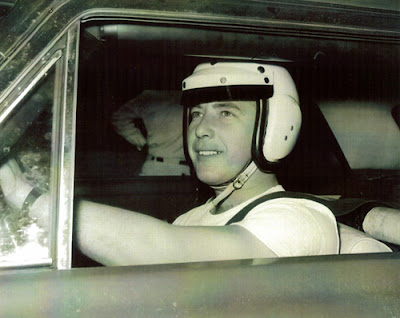 (July 3, 1958) - Lloyd B. Cunningham, secretary of the Iowa State Fair and a member of the board of directors of the International Motor Contest Association, said Thursday he is going to check to see if there has been any violation by drivers racing under assumed names at Pioneer Raceway here.

The track was ruled out of bounds for IMCA drivers two years ago by labeling the quarter-mile track as an “unsanctioned track”.
Cunningham said, “I will consult the book rules and if there was any violation it will be taken up immediately with the IMCA board.
Johnny Beauchamp of Harlan, the 1957 IMCA stock car driving champion, won major honors at Pioneer last Sunday under the name of “Jack Davis, ”
Bob Burdick of , another top IMCA late model driver who won the feature at Pioneer a week ago Wednesday and placed second in Sunday’s feature, raced under the name of “Don Quinn, ”
They said they had competed under assumed names to “avoid trouble with the IMCA.” The IMCA is an organization run by Midwest and Southern state fair secretaries.
Ernie Derr of Keokuk, former national champion, denied he competed under an assumed name a week ago Wednesday. “I was up to see the race that’s all,” Derr said.
Beauchamp said, “We didn’t want to get fined by the IMCA. We got in a little late; didn’t have time to check so we just signed up under other names.”
Both Beauchamp and Burdick drove to Sunday from an IMCA sanctioned meet at where Burdick won.
Beauchamp explained, “We assumed our appearance wasn’t in conflict with the IMCA rule on dates since we’d appeared at , but we weren’t sure, so we just used other names to keep out of trouble.”
Burdick said, “We assumed it was the best thing to do. As I understand it, the IMCA promoters Al Sweeney, National Speedways, Inc., and, Frank Winkley, Auto Racing; Inc., don’t want us to use our regular names outside the IMCA circuit.”
“They don’t want fans that pay their three to four bucks a ticket at big meets, to see us for a buck at some other track in the same territory.”
Marion Robinson, who promotes races at Pioneer, said he knew of “13 or 14 of the 46 drivers here Sunday signed up under different names.”
He added, “I'm not going to question them — besides I didn't care to get into another rhubarb with Sweeney. He doesn’t want me to use his drivers.”
Editor’s Note: A week later, a press release was sent out by John Libby of St. Paul, Minn., the secretary of the International Motor Contest Association, stating that six drivers; Kenneth Schultz of Wisconsin Rapids, Wis.; Bob Burdick of Omaha, Neb.,  John Beauchamp of Harlan, Iowa, Lloyd Jorgenson of Anita, Iowa, Newt Bartholomew of Carlisle, Iowa and Bob Short of Des Moines, Iowa, were all accused of using false names to compete in non-sanctioned races in the vicinity of IMCA sanctioned meets and were all being fined $100 a piece.