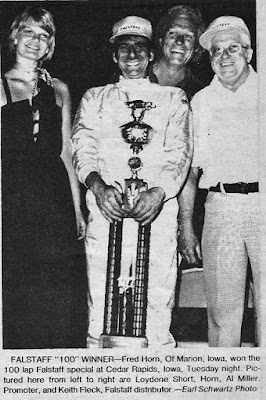 And to say that the 28 cars that started the fifth annual Falstaff 100 Tuesday night at Hawkeye Downs dueled furiously and intensely is a vast understatement.
Marion's Fred Horn steered his sleek 1977 Camaro to the checkers abut a car length in front of Waterloo's Bill Zwanziger to put the finishing touches on a dazzling stock car program that delighted 6,500 race fans.
“I just wanted to run flat out and the car performed,” breathed Horn after outlasting Zwanziger's 1977 Nova in a heated battle that went bumper-to-bumper and side-by-side for the final 30 laps of the 100-lapper.
“This is probably my greatest racing win. I won the Iowa 300 IMCA race once, but this is probably the most prestigious, the top short track drivers in the , maybe the whole country, were here tonight.”
“I sure feels good to win and I'm telling you, I have to pay the highest tribute to Bill Zwanziger. We were right together through those last laps and he didn't touch me once.”
Kalona's Mike Niffenegger won the pole position with a 24.76 lap in time trials, but Zwanziger, a former Falstaff winner, moved to front on the second lap.
That changed one lap later when defending champion Curt Hansen of Dike took over and led until Zwanziger took over on the 35th tour. And while the record crowd feasted on the front-running action, Roger Dolan of Lisbon and Bill Rice of Des Moines were steaming like there was no tomorrow.
Dolan started 16th, but was running fifth on the 35th lap. That was just one lap before 's Ed Sanger, another former winner, went to the pits with engine problems. Sanger was driving his backup car.
Rice started even farther back, 19th on the grid, and he maneuvered relentlessly until finally moving into his eventual fourth-place finishing spot on the 94th lap.
Dolan opted for tile high groove from the beginning and had pedal to the metal until he went around Zwanziger on the 60th lap. The veteran was making a run at Horn going into the second turn on the 69th lap when he spun out and lost six positions. He came back to finish sixth.
Horn picked up $1,600 for the win and confided later he loves longer races. “I've like to go 100 laps or more, it’s more appealing racing. It gives you a chance to really see what your car can do.”
“I’m driving a lighter car this year, but tonight I think we were about 2, 850 pounds because we added some weight. It was a good test for the Camaro. I want to give my brother Ed some hard-earned credit. He maintains the car and really had it set up right tonight.”
Rice was racing for the fifth straight day and arrived late Tuesday night after pulling almost 500 miles from , where he won $1,100 for winning a special Monday night.
“After we timed and had to run that heat race we seriously thought about loading up and heading for Moines,” said Rice. “We've been on the road constantly all weekend and everybody in the crew/w is really tired.”
Bill can temper his worn-out feeling when he totals up his earnings since last Friday night. In the money at Boone, , , and and then in the Falstaff, his earnings total $2,930.
Mike Frieden won the 20-lap consolation and picked up $200.
's Roger Dolan wowed the crowd of course, with his brilliant drive from 16th and after cooling off with a beverage after the 100-lapper mused, facetiously, “That's what I get for driving so conservatively.” On the 59th lap, Dolan scraped the wall in the back stretch and sparks flew, but in the process passed Curt Hanson into second place behind Horn . . . Most observers were amazed that 10 cars all finished on the same lap, let alone go the entire 100 tours. “It was amazing,” said veteran race announcer Tony Dean, now of Huron, S.D., “that 21 of the 28 starters were still racing at the finish.” Dean got his start announcing races at various Eastern Iowa tracks.