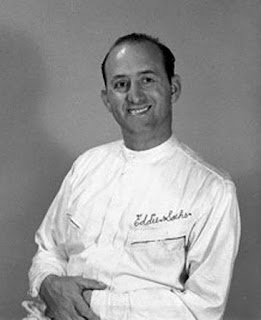 (June 10, 1961) - Eddie Sachs, the driver who lost the 500 this year by a mere eight seconds because of worn tires, leads a brilliant field of drivers for the 200-lap USAC late model championship Sunday, June 11 at the Dayton Speedway.


Sachs is no stranger to the high banks but this marks his initial appearance as a late model stock driver. Sachs is a veteran of five races, having held the pole position for the past two years. He finished 12th in the USAC national standings last year and was the 195S USAC Midwest spring champion after finishing second in both 1954 and 1955.


Other Indianapolis 500 drivers who will be on hand include Dick Rathman, a veteran of seven races; Paul Goldsmith, who finished second last year in the USAC late model stock standings and who won an earlier USAC late model event at the Dayton Speedway; and Bill Cheesbourg.


Other early entries include Don White of , Elmer Musgrave of , Skip Michaels of , Arnie Gardner of , Bill Shoulders and Lou Kamie, both of Waukegan, Ill., Gene Marmor of Schiller Park, Ill., Ken Finley of , Dick Clement and Sal Tovella, both of ; Les Snow of , Don Swenson of West Chicago, Herb Shannon of Peoria, Jack Holbrook of Melrose Park., Ill., and Eddie Meyer of Glenview, Mich.


Sunday’s program will open at with time trials for late arrivals and the first heat race at Admission Sunday is $3.50 reserved; $2.50 grandstand, and 50 cents for children.