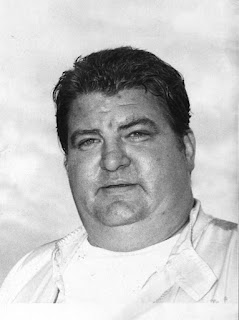 West Liberty, Iowa (June 23, 1977) - Many names have come and gone over the years on the stock car racing circuit at the West Liberty Fairgrounds racetrack.


But the one name which has-stood the test of time best is that of Johnny Moss of , who is in his 21st year behind the wheel of a stock car.


There may be other drivers around the 20-year mark, but Moss has been racing every year at and tracks in other parts of the state.


Friends and foes alike know him as big Johnny Moss because of his 6 foot, 4-inch, 300-pound frame, which he squeezes in and out of his car.


Big John, who turned 42 on June 10, is a heavy equipment operator. His racing career started in 1956 when he started building stock car engines and became the co-owner of a car with Bob Gingerich of .


Moss has had more than his share of mechanical problems with his car this year and currently is in 13th place in the late model division point standings with 770 points.


For success, he's possibly done his best on the Iowa State Fairgrounds track in ; but he still likes the track even though it's narrow in spots. “Racing here (at ) is like coming home,” he says.


At one time, big John had four cars and one of his regrets was that he didn't capitalize on an opportunity to race on the late model USAC circuit in the South. “If that opportunity came along now and I was younger I'd jump at it.”


Besides lots of changes among the drivers he competes against, Moss has seen many changes from the days when the Mississippi Valley Speed Club sponsored jalopy races at the , Columbus Junction .and tracks.


It takes much more money to build a late model stock car and John says “We've got as much money invested in tires now as we used to have in those old jalopies.” Over $25,000 is invested in three engines.


One change Moss doesn't like in the rules changes made by Super Stocks, Inc., which sanctions the races now, is that the competition is lined up, according to the point standings.


Drivers, used to compete in time trials for positions, but with his car problems this year his place in the point standings haven't given him any advantageous starting spots. “I'll take time trials any day,” he says.


While many things go into the long career of a respected racing contender like big Johnny Moss, he claims the success of any racing team is about “75% car and 25% driver.”


In looking at his own career, Moss says “I guess a guy ought to be able to race until he's 50 if he wants too.”


His own concluding testimonial of the many hundreds of races in which he's competed is “If I had it to do over again, I'd still become a race car driver.”