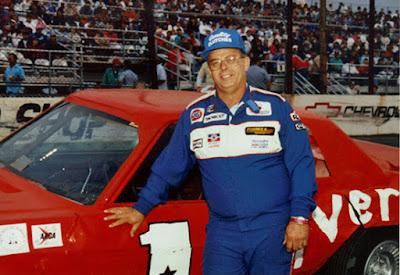 Marvin Smith
(June 3, 1979) - Marvin Smith put his 1979 Oldsmobile on the pole for the ARCA-sanctioned 100-lapper at Nashville International Raceway on Sunday afternoon and proceeded to dominate the event, beating Bob Dotter to the checkered flag.


The race was run in addition to the NASCAR national championship late model sportsman race at the same track that same afternoon.


Smith bettered his old record set of 20.79 seconds when he zoomed around the 5/8-mile banked paved oval in 20.71 seconds, during Saturday's qualifications.


Following Smith and Dotter across the finish line were Joe Raymond, Jim Cushman, and Moose Myer, all in the same lap. Bobby Watson and Steve Ellis were two laps down in sixth and seventh place and Darrell Basham, Greg Pike, and Jack Wallace rounding out the top 10, four laps down.


Kyle Petty was supposed to compete in the event in a brand new 1979 Ford Granada. However, the car was having brake problems so the only son of NASCAR legend Richard Petty, who hopes to compete for 1980 NASCAR Winston Cup Rookie of the Year honors, turned the ride down.


The same car hit the wall and practice with the new driver in it on Saturday. Greg Pike qualified the machine and later drove it to a ninth place finish in the race.