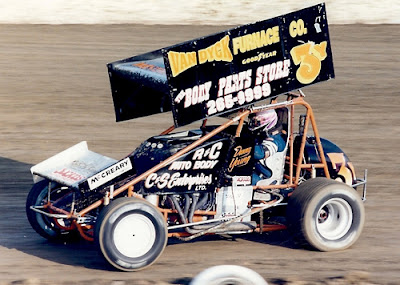 
Burlington, Iowa (June 27-28, 1994) - Danny Young wanted to run both classes at the USA Sprint Car Nationals at 34 Raceway.
He was turned down.
That meant he would only dominate one class.
The Des Moines driver established himself as the favorite in the limited sprints class, having the fastest time in qualifying and winning the Fast Car Dash in the first night of the two-day event Monday on the 3/8-mile dirt oval.
Young also wanted to drive in the unlimited sprints, but track officials refused his request.
"They told me I had to have two cars," he said. He took the one car he had and ran a fast time of 14.59 seconds in qualifying. That put him in the sixth position in the six-car Fast Car Dash, but he had the lead in the 10-lap race before the field came out of the second turn on the first lap.
"He is a very aggressive driver," said Bart Schneiderman of Burlington, who will start outside of Young in the first row of tonight's 25-lap feature. "I knew he would be right on me in the first lap."
"I didn't come here to finish second," Young said. Young has won 10 features this season.
"When we've raced, the car has run well," he said. "But we've had some bad luck. We broke a rear end twice last weekend."
What will it take to beat Young?
“A miracle, maybe," Schneiderman said. "The car will be ready, I'll be ready, and the crew will be ready. But (Young) is awful strong."
Randy Wagler of Danville and Jeff Haines of Oskaloosa will start in the second row. Steve Wares of Knoxville and Scott Whitworth of Worthington, Mo., will be in the third row.
The 30-lap unlimited sprints feature has several favorites.
Gary Wright of Hooks, Tex., had the fast lap of 13.49 seconds in qualifying. Johnny Herrera of Albuquerque, N.M. won the Fast Car Dash. Danny Lasoski of Dover, Mo. - who won of the features at the World of Outlaw's Valvoline Classic at Knoxville Raceway on Saturday - had the third fastest time and finished second behind Herrera in the Fast Car Dash.
"It'll be a great show," Herrera said. "It could be between Danny and me, but Gary was strong in qualifying and other drivers could sneak in."
Herrera and Lasoski will start on the front row. Randy Smith of Mount Ayr will start with Burlington's Todd Taeger in the second row. Wright and Terry McCarl will start on the third row.
"It was like 'follow the leader' (in the Fast Car Dash) because the way the track changed," Herrera said. "My car ran well. If the track is the same tomorrow night, we won't change much."
On Tuesday night, Danny Young was perfect…and Gary Wright was almost perfect.
The two drivers took feature wins on the final night of the USA Sprint Car Nationals Tuesday at 34 Raceway.
Young won the $1,000 top prize for winning the limited sprints feature, while Wright won $5,000 for taking the unlimited sprints feature.
Young won all of the honors in the two-day event on the 3/8-mile dirt oval. He had the fastest car in time trials and also won the Fast Car Dash Monday, then came back to lead all 25 laps of Tuesday's feature.
Young's car was so perfect not even an incident on the seventh lap could disturb its rhythm. Young went in to the first turn too low, striking a tire marker embedded at the bottom of the turn. But the Des Moines driver kept the lead.
"I was looking for a groove with a little moisture, but I went too low," Young said. "But the car didn't even bobble. The car ran well all night."
Young started from the pole and was lapping cars by the fifth lap.
"I didn't think we would be lapping cars that fast," said Bart Schneiderman of Burlington, who finished second. "When we got into lapped cars, I think he had the advantage."
Young sailed through the slower cars by using several grooves. "It could run just about anywhere," Young said.
Schneiderman, who chased Young through the Fast Car Dash, stayed close because of four caution periods.
"I was hoping I could use the restarts to get a better jump on him," Schneiderman said. "My car was good, except it was a little loose. I was tickled to finish second."
It was Young's 11th feature of the season.
Butch Nutaut of Springfield, Ill., finished third. Jeff Haines of Oskaloosa was fourth.
Wright also had the fastest car in time trials, but a different set-up hurt him in the Fast Car Dash. He finished fifth in the six-car field.
"We tried a different set-up as kind of experiment last night and it really hurt the car," the Hooks, Tex., driver said. "We just threw everything out and went back to the original setup."
Wright started fifth in the field and trailed early as Johnny Herrera and Danny Lasoski controlled the first 20 laps. Herrera, who started from the pole, led the first 16 laps before Lasoski led laps 17 through 19. Wright then took the lead and held on for his 10th feature win of the season.
"We had the right tires and the right gear," Wright said. "It was tough getting through lapped traffic, but the car ran well."
Herrera held off Lasoski for second. Terry McCarl was fourth. Aron Berryhill was fifth.