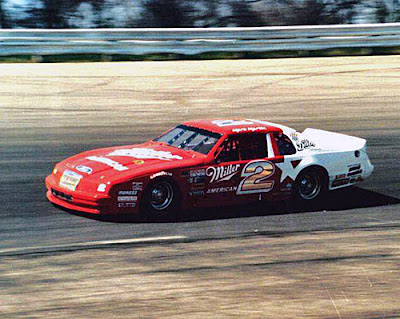 Martin passed Trickle, who had lost his brakes completely, in turn four on lap 294 and went on to win his first American Speed Association race of the season with an average speed of 72.825 miles per hour. He earned $8,340 of the 159,940 purse and also took over the ASA points lead.
“It was a grueling race,” said Martin, the polesitter. “Everybody had their share of misfortune but I had the least. At the end we were virtually out of brakes but Dick was completely out.”
“I was all over Dick but I didn't know if I could pass him because I was out of brakes with about 20 laps remaining. I was watching his car and noticed it was getting worse in the corners, so with about 10 laps to go I decided to make a move.
There were two other moves that helped Martin triumph. The first came on lap 156 when Butch Miller, running second, blew an engine coming down the front straightaway. Miller spun his 1986 Chevrolet in turn one and was struck by Mike Eddy's Chevrolet. Martin also spun but was able to avoid serious contact.
“Had not Mike hit Butch, he would have hit me, so I was lucky to come away from that accident,” said Martin. “Lady Luck was on my side.”
The second move came in the pits. On lap 253 under the last of eight caution flags, all five cars on the lead lap pitted. Leader John Ziegler of was first to enter the pits followed by Trickle, Bob Senneker, Martin and Tom Jones. Trickle was the first out and Martin second.
“That stop was very important because I picked up two places,” said Martin. “It’s a different race if we come out third or fourth. The crew did an excellent job.”
Ziegler wasn't as fortunate in the pits. His crew had trouble changing the right front tire and also was unable to get the jack cleared before he took off. The jack stuck with the car for several feet and then spun onto the track.
“There is a pin on the jack and it stuck in the car,” said Ziegler, who, after running over the jack, returned to the pits a lap later. “The crew thought there might have been some damage but there wasn't.”
Ziegler was out of contention when the green flag came out on lap 258, and finished fifth. Senneker, of , was third and Jones, of , fourth.
“That was the first time we raced that car so I can’t be disappointed,” said Ziegler, who was unable to make up ground after the pit stop because he also burned his brakes down.
“Usually it takes two or three months to get the car running like it was today. I'm very satisfied with the finish.”
Rich Bickle Jr. of Edgerton didn’t even get a chance to push on the pedal. He qualified fifth Saturday but engine problems kept him from starting.