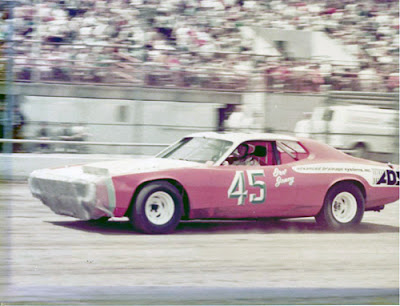 
That was not in the original plans for the driver, who last year fulfilled a dream of his and his late father Ed’s by winning the IMCA championship.


“Oh, I was encouraged in the offseason when IMCA decided to guarantee the defending champion (Janey) $200 in appearance money,” admitted Irv. “But the straw that broke the camel’s back was when IMCA announced that the season opener at () was a 200-lapper and paid only $500 to win.


“That took away all my enthusiasm. Shreveport is 500 miles from here!”


Janey added that IMCA does not “have enough races booked to make it worthwhile, either.” But he might enter the field for the Firecracker 300 at the night of July 4. “I haven’t joined IMCA, yet, but if USAC doesn’t object I may race,” he explained.


If Janey doesn’t participate, it will mark the second time in as many years that IMCA’s defending champion has not been on hand for the annual event which was previously known as the 300. Ernie Derr didn’t compete last year. Derr, like Janey, is running the full USAC slate this year.


Irv still runs for Marty Sixt’s Advance Drainage Systems outfit out of . While his USAC mount is a 1973 Dodge Charger, he pilots a 1970 in the weekly show at Hawkeye Downs on Friday night. He's been less than impressive at the .


“I never seem to run well at home,” he said, “but we’re starting to get it working. Actually, it is working okay – I’m just not fast enough. It’s taking me more time to get competitive.”


Janey isn’t sulking over his lack of success at the . To the contrary, he points to the keen competition and other known factors that seem to plague non-Chevrolet drivers.


“If you can run with these guys here (), it’s like going to batting practice when you enter races at other tracks. It's really good for you - it keeps you sharp.”


“But the Chevrolets definitely have an advantage with more cubic inches in their engines and less car weight. Even with the hemi engine (426 cubic inches), we are smaller. Fred Horn has the same problem with his hemi . The Chevys have more cubes and they are 500-700 pounds lighter than our Plymouths.”


By local Cam-Car rules, that is permissible, but USAC doesn’t allow it, Janey explained.


“USAC holds the cubes down and every car has to weigh 3,900 pounds. Either that or you have to run a pony car with a small engine.”


“I really don’t mind the local rule, though, and I don’t think I'll ever make the switch to a Chevy. I don’t think it’s good for racing if everyone starts running the same kind of car.”