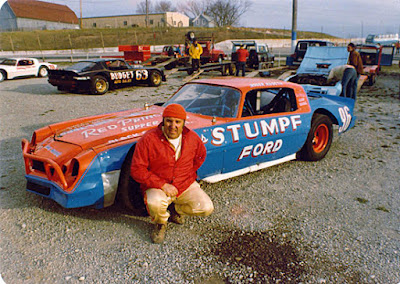 Roger Regeth - Photo Courtesy of Joe Slack
(June 7, 1976) - It takes more than an experienced driver to be a consistent winner on area race tracks. You also need top quality machinery and capable mechanics, according to Kimberly’s Roger Regeth.


The highly-successful 37-year-old racer said, "There are a lot of excellent drivers around here. But sometimes their equipment doesn't measure up. “I have great respect for guys like J.J. Smith, Pete Parker, M.J. McBride and Jerry Smith to name a few, because they are good drivers who have the equipment to go with it.”


Regeth, a full-time automobile wholesaler, emphasized that you must be willing to pay the price for first-rate equipment. “You can’t cheat a race car,” he said. “You have to use the best equipment you can find if you expect to win races.”


The veteran driver also gives a lot of credit to his mechanics. “When I come to a race, I just jump into the car,” he said. “I rely on my mechanics, Mike and Jim Randerson, Gene Weber and Tom Schmidt to keep it running. The most I ever have to do is chase down a part once in a while.”


Roger’s racing career was inconspicuously launched in 1961. “I used to hang around a garage when I was living in ,” he recalled. “The guys there built a sportsman car, which is like our hobby stock, and they needed someone to drive it.”


“I ended up driving and I managed to take second place in the race. I wasn’t really scared the first time I drove. It bothered me at first that I might roll the thing over. But once the starter’s flag fell, I forgot about being afraid.”


Regeth was involved in only two noteworthy mishaps during his 15 years of racing.


“I broke seven ribs during a race in , in 1968,” he said. “That accident occurred because of a misunderstanding. I told the mechanics that the car needed some weights in one place and they put them in another. This caused a spinout and the injury.”


“Then, last year, a gas line break caused my car to become engulfed in flames. Things were hairy for a minute. But I got to the fire extinguisher as calmly as possible. The fire didn’t bother me for long. In fact, the very next night I went out and took first place in a race.”


How big is the driver’s role in racing?


“There’s a big difference between driving on a dirt track compared to asphalt,” Regeth assessed, “If the tires aren’t right or the car isn’t handling easily on a dirt track, a driver can make up for it some. But if your equipment causes you to slide on an asphalt track, you’re pure history.”


Regeth quickly gained prominence as a race driver. He won track titles in Hales Corners, Cedarburg, Slinger and , in ‘61.


Then, from 1963 until 1969, he was on the USAC circuit. Once, he finished ninth in point standings and also took 17th before leaving USAC. “Running USAC was quite expensive,” said Roger. “After a while, things just weren’t paying off.”


Regeth moved to the Fox Cities and competed on short tracks in 1970. In 1973, he drove Gene Wheeler’s ‘72 Chevelle equipped with a 427 engine to 17 feature triumphs. He captured the title in De Pere and finished second in the standings at Shawano.


In 1974, Regeth won six races with Wheeler before the twosome parted as friends. During the remainder of the season, Roger joined Jerry Sheriff and Mark Randerson and piloted their Camaro to 17 more victories. That brought his number of first place finishes to 23 for the year.


Last season, the Kimberly driver won 26 races and was the track champ at Shawano, De Pere and . He was third in the standings on Wisconsin International Raceway’s paved oval.


Regeth, who says top competition brings out the best in him, isn't resting on previous accomplishments this season.


In order to remain competitive, he’s constantly having his vehicle improved. He now drives a '73 Camaro that weighs less than 2,500 pounds and contains a 350 cubic inch motor. Most drivers have heavier machines and run engines in the 450 cubic inch range.


“Having a lighter car is a new thing,” said Regeth. “So far, we’re having luck with the lighter car. You have to keep trying to make changes for the better and attempt to stay ahead of the competition.”