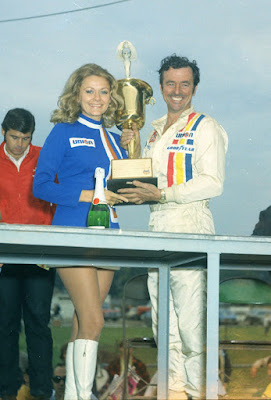 Hartman leads the USAC standings with 3,492.5 points, but Roger McCluskey, who finished fifth in Sunday's test, remains in striking distance with 3,270 points.

There are 250 first-place points available in the circuit's final race, in Nashville, Tenn. White, in a 1972 Charger, took the lead on the 213th lap after a long duel with Hartman's 1972 Charger.

Then Hartman ducked into the pits for fuel, rain arrived as White reached his 229th lap, the caution flag was out until the 248th lap, and the field was unable to catch White with only two laps remaining.

Bobby Unser, fastest qualifier for the $37,675 purse bowed out of the race in the eighth lap with a blown engine

"Honestly, I hoped the race would finish on the yellow," White said. "I knew I could win it anyway, because I felt it was fast enough. But it gets dangerous out there with rain hailing on the spilled oil and gas."

"It was like grease. I felt it was too wet for the green flag to come out. It's bad for me to say that, because I was leading and nobody could do a thing about it while the yellow was out. If we'd have had 15 miles to go, I'd have had to sprint to stay ahead. This way all I had to do was be careful."

White said he was confident he could have handled any challenge down the stretch because he had enough gas left and his tires were in good shape.

"Everything went my way for a change," he said. "I've led a lot of races and then had one thing or another go wrong. But this time I made my third and last pit stop on the 172nd mile, and I know I can get 85 miles out of a tankful.”

"I had figured to go all the way without another stop. Then the rain came again, and I can't say I was unhappy about it. It was a close race for quite a way, and you wouldn't be a racer if you didn't like it that way. But can't recall the last time I won, when something didn’t foul me up."