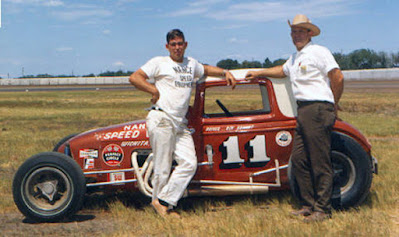 Hutchinson, Kan. (September 17, 1968) - Roy Bryant, Wichita, well known to Hutchinson fans for his modified jalopy racing, captured the feature event in the speedway type car races at the Kansas Fair Tuesday, and with it the point championship of Big Car Racing Inc. for the season.

Bryant was second to Chuck Kidwell, Lincoln, Neb. in the point standings before the race, but Kidwell finished far back in the pack and Bryant grabbed 210 points for a winning finish, giving him a season total of 457 points to Kidwell's 385.

The 20-lap feature was strictly a three-car battle from the start, with Bryant and Dick Sutcliffe, Kansas City, Mo., dueling continuously for the lead with David Ross of Jetmore a steady third. All other cars were far behind. Sutcliffe had a narrow lead most of the race, but on the 17th lap he hit turn three a bit too fast, skidded wide into the soft dirt, and Bryant shot past him on the inside.

Bryant also had the best time in the trials, with a snappy 23.79. And he was winner in the four-lap trophy dash.

Dale Reed, Wichita, had a 100-yard lead with less than two laps to go in the consolation race when he blew his engine. Reed, starting third in the race, took over the front spot on the third lap and was steadily gaining ground when the engine quit and he rolled to a stop in the infield. Ralph Parkinson, Wichita Falls, Tex., was the race winner.

David Ross, Jetmore and Jan Opperman, Des Moines locked in a spirited duel for first in the third heat race, and it appeared one or the other would be a sure winner. They were running side by side into the third turn on the last lap, but built up too much speed on the back stretch and skidded wide as they started the turn.

Gordon Woolley, holding third place on a tight inside position, shot through the gap to capture the race.

Larry Dewell, Fowler, made his debut as a big car driver in the second heat race, but the gears went out on his car in the fourth lap and he was forced to drop out of the race. Harold Leep, Wichita, blew an engine in the third heat race.

The second heat race provided the most excitement. Al Bodenhammer, Raytown, Mo., skidded too wide on the fourth turn, and bounced against the wall. However he managed to right the car and keep going for a last place finish.

Roger Lane, Blue Springs, Mo., wasn't as fortunate. He spun out on the first turn, and finally came to a stop, against the wall and heading the wrong way on the track. The race was re-started.