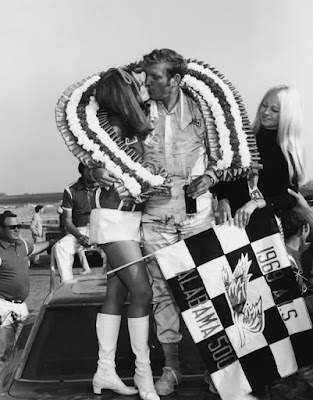 Richard Brickhouse enjoys the spoils of victory after winning the Talladega 500.


Talladega, Ala. (September 16, 1967) - Richard Brickhouse, driving a borrowed 1969 Dodge Daytona Charger, charged through the final 26 miles of the boycotted Talladega 500 Sunday to win the inaugural Grand National race at Alabama International Motor Speedway, which most drivers found so dangerous they refused to race.

Brickhouse, of Rocky Point, S. C., stepped into the purple twin "T" tailed car when a driver boycott took virtually every star on the big stock circuit out of the race Saturday. His average speed was 153.778 miles per hour over the 2.66-mile, high-banked tri-oval.

Brickhouse charged past Jim Vandiver, Charlotte, N. C., on the 77th lap of the 188 lap chase, turned on the steam, and took the checkered flag for his first victory in Grand National competition and a $24,550 payday.

Although the driver boycott called by NASCAR's professional Drivers Association limited the field to only a few cars which could have won the race barring accidents, the entire 500 miles was a dogfight between Brickhouse, Vandiver, the second place finisher, Ramo Stott, Tiny Lund and Bobby Isaac.

The car Brickhouse drove belonged to Ray Nichels and Paul Goldsmith. Goldsmith is a former Grand National Star. Stott, Keokuk, Iowa, a driver on the ARCA circuit, was third in a 1969 Dodge and, Isaac, Catawba, N. C., was fourth in the race's other airfoil-equipped Dodge Daytona.

Although the drivers had been told by the tire companies that they would not furnish tires for speeds of more than 190 mph, Brickhouse turned better than 195 over the final laps. "We got our tire tests in on those last laps" an official of one tire firm said.

One of the things that triggered the driver boycott was belief by drivers that tires built for the track were not safe. The tires Brickhouse ran, however, had never been adequately tested, tire men said.

"That was just great, just great," Brickhouse said as his car pulled into victory lane, the first time Chrysler has been in the winner's circle on a major superspeedway this year.

In the battle to claim the first Talladega crown, Brickhouse, Vandiver, Isaac, Stott, Lund and Dr. Don Tarr seesawed back and forth into the lead 35 times. During most of the race, the top cars were in the same lap - running two and three abreast at times.